That's awesome looking pictures of your tanks you post.
Really one neat aspect of our hobby is the unique personalities of our inhabitants and interactions with them.

Im getting some "algae". Very long very thin brown threads. looks like dirty spider web. At first it thought it was my hair with some junk on it. 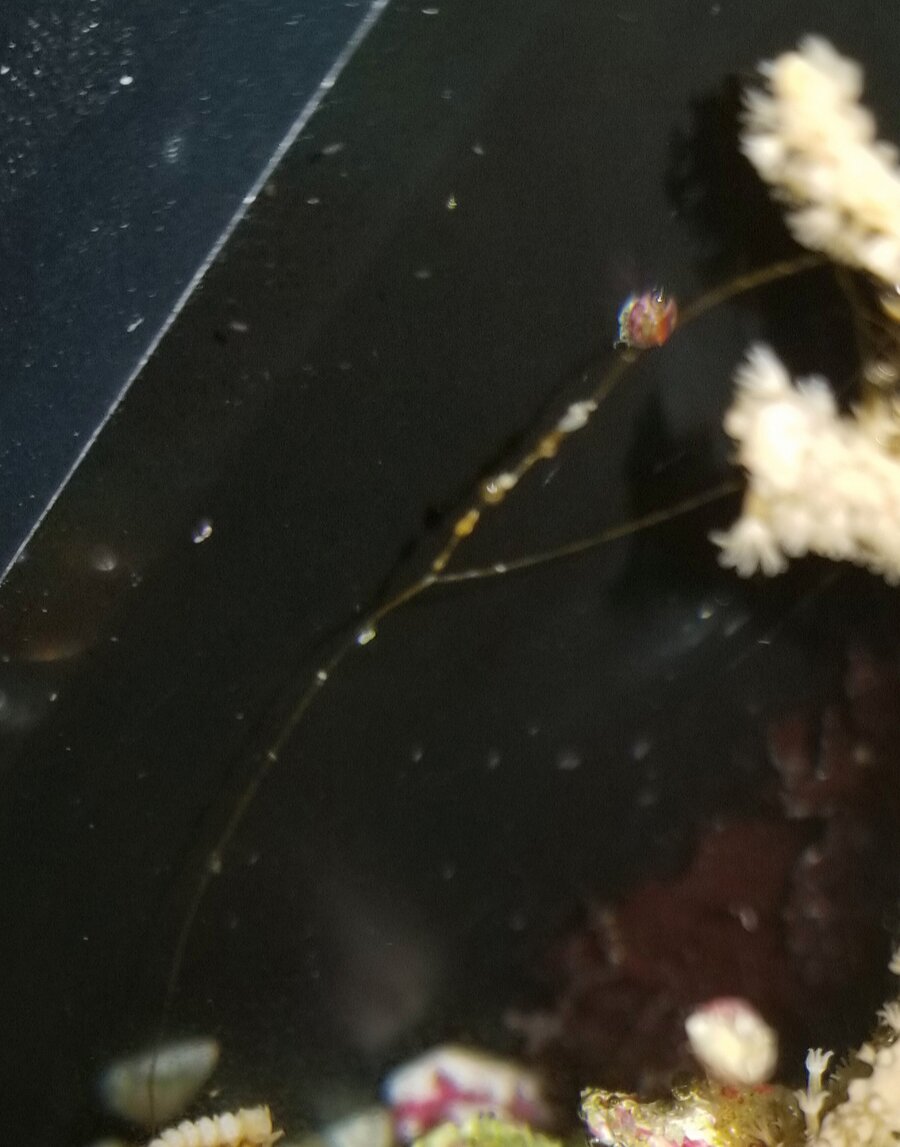 It started after I pruned too much of the macro and going over due for filter media/water change. Basicly everything went up. Corals and fish seemed fine I had a tuft of algae pop up on the spray bar. (Still there but getting pale and thin should remove) I did a water and filter change the levels sharply fell. Then I had this stuff pop up after the water change. I thought perhaps it was dinos but having the lights off dosnt seem to phase it one bit. It still looks the same the next morning after lights off. It also dosnt crumble or fall apart like dinos if you remove it. It holds its shape and you can manualy break it appart like a cob web but not as strong it's very weak but very web like. Check out the thread like brown "algae" running from one side to the other.

Theres only a few strands. It appears to be shrinking the last few days the strands have gone from four to two now. If I remove it comes right back in the same place in a day or two. Appears to be heading in the right direction as theres less of it so I'm not overly concerned but it looks rather odd. I still think its probly dinos of some kind but its not disappearing or becoming smaller with lights out is a bit odd.

The deep red coraline has started spreading more it seems to like the highest flow areas on the spray bar and around the wier but I do see some tiny specks in other spots on the rocks. Alot of the zoas are starting to take off the kaleidoscopes, scrambled eggs, emeralds on fire, rastas, bambams, frozen apples, and red ring purple heart all have alot if new polyps. Those ones seem to be growing fastest. The true blue belladonna and blood suckers have the next fastest growths.
Last edited: Nov 1, 2022

I think the weird algae web is gone so is the tuft of algae on the spray bar.
Some blue light pics. 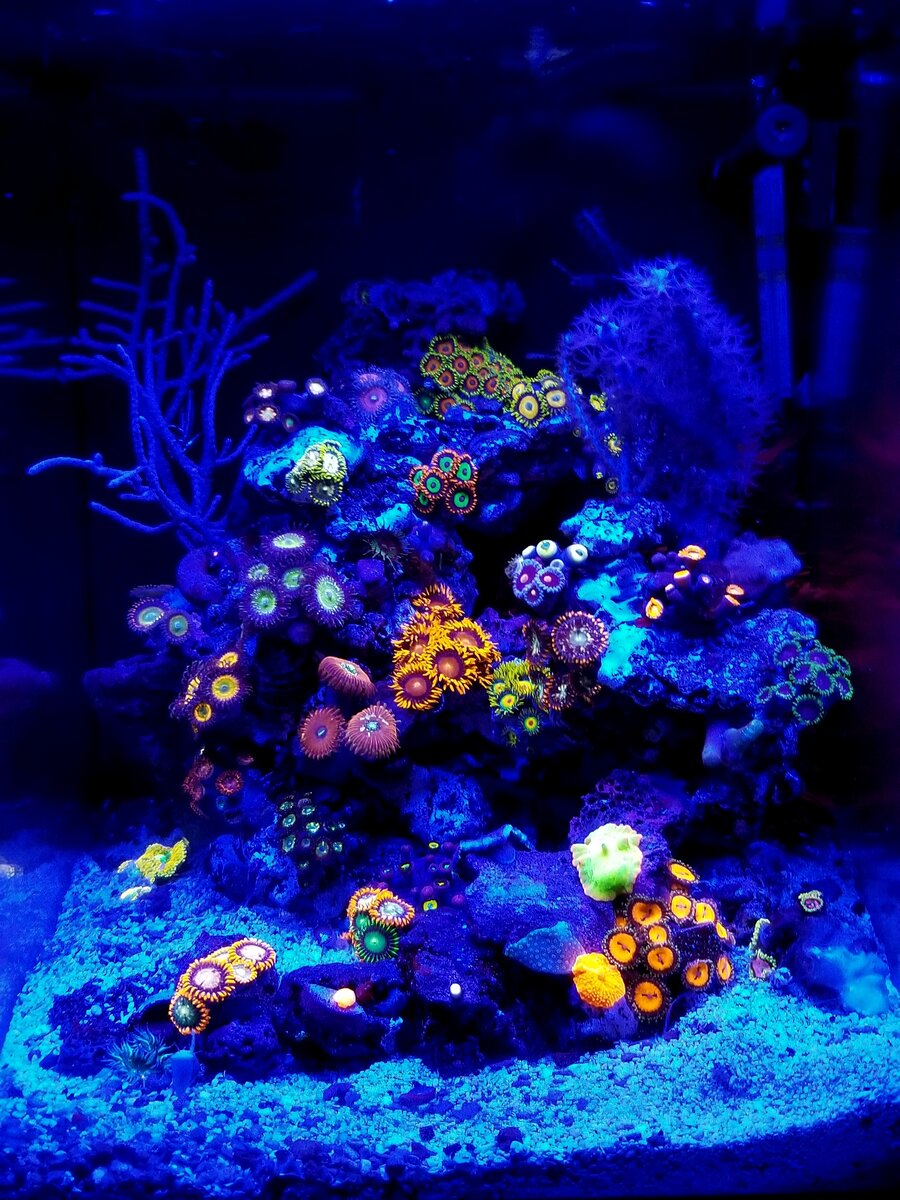 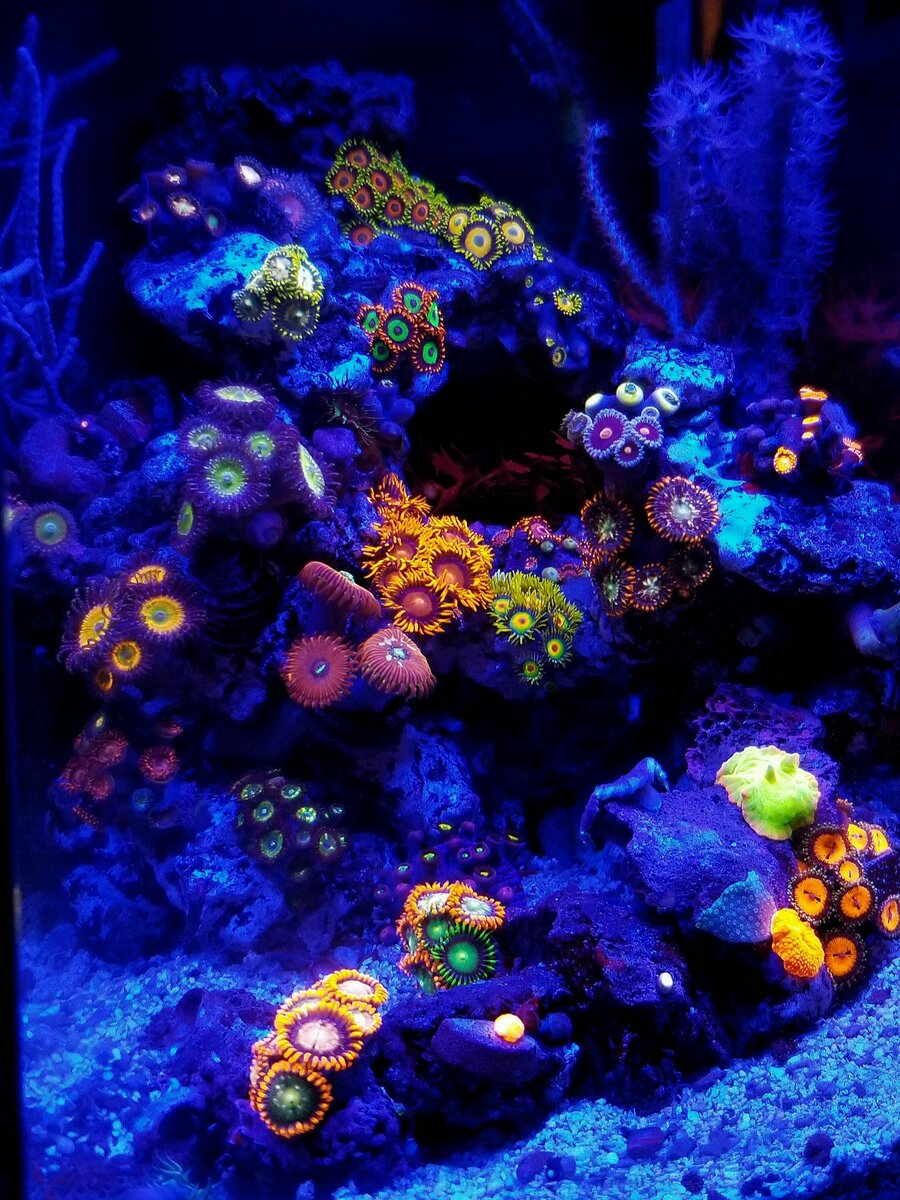 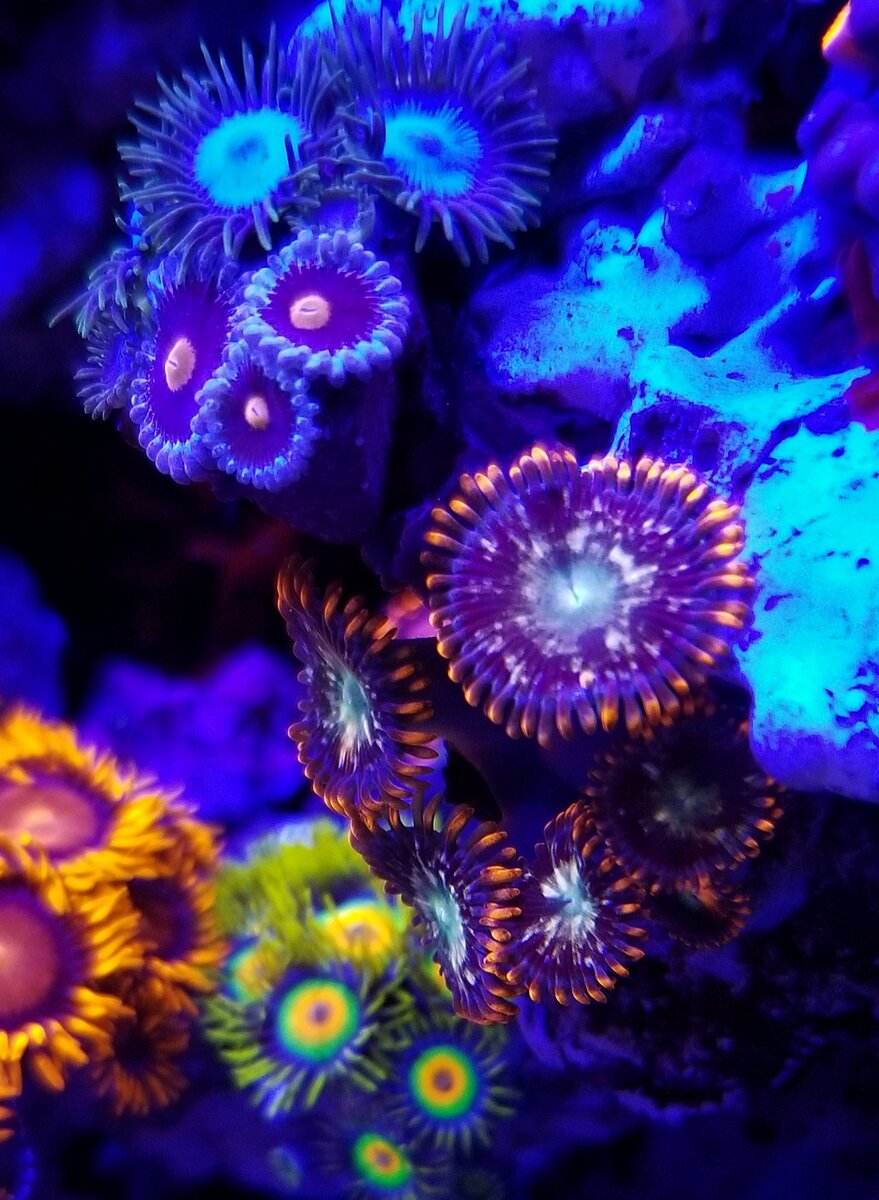 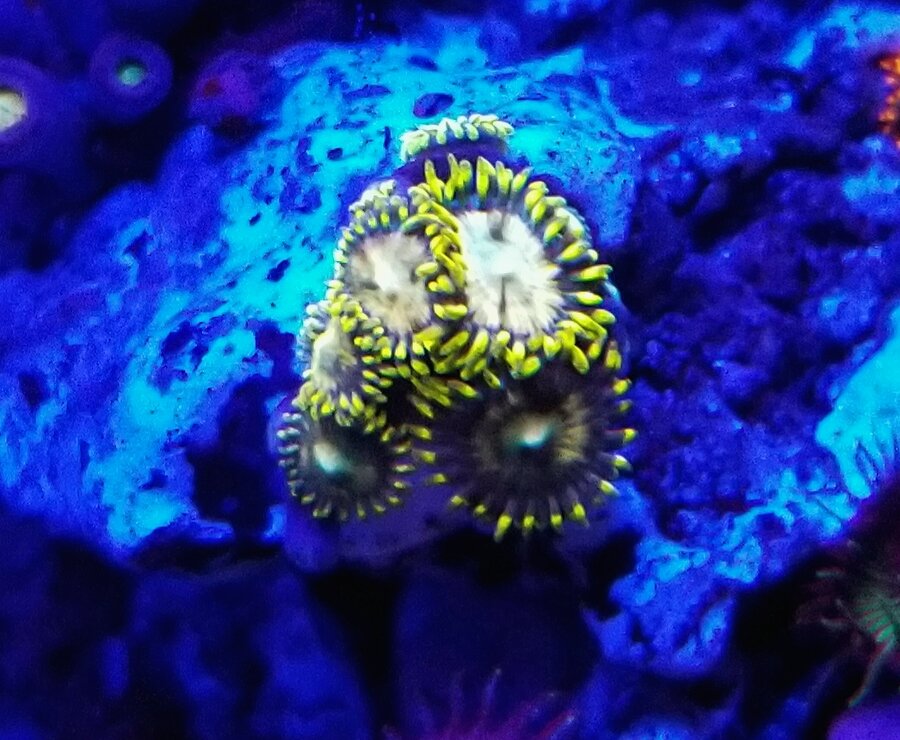 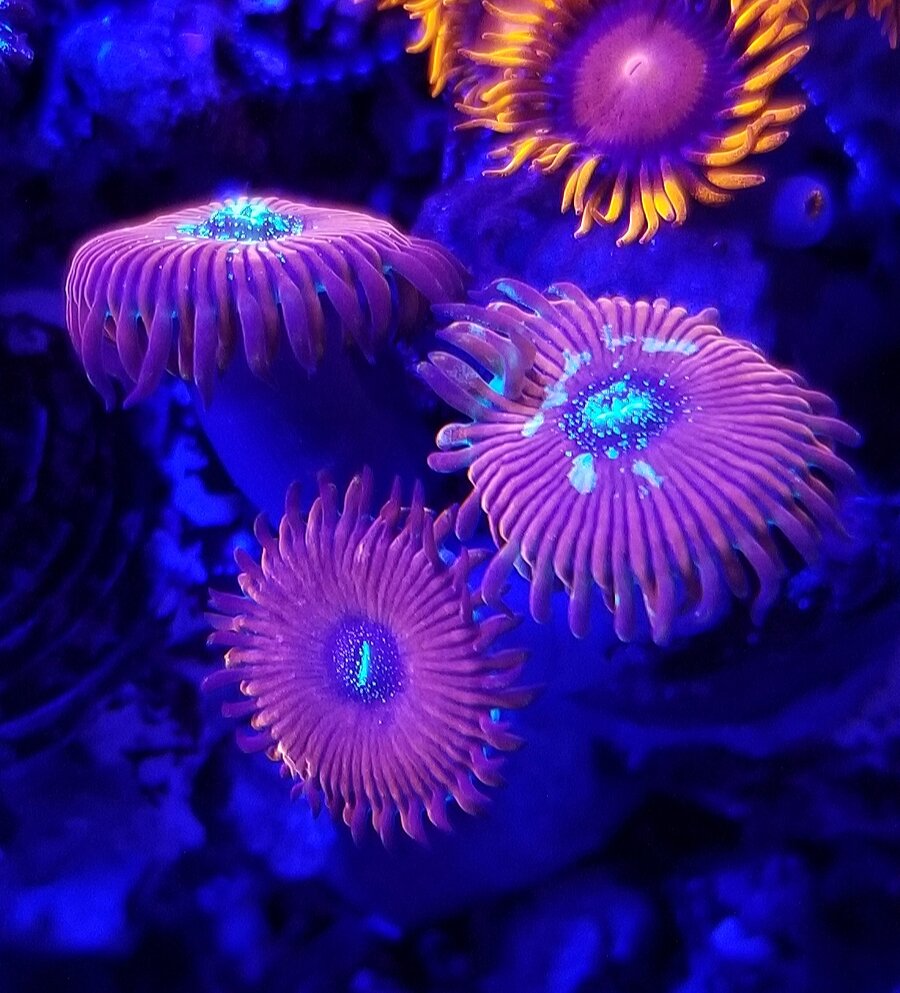 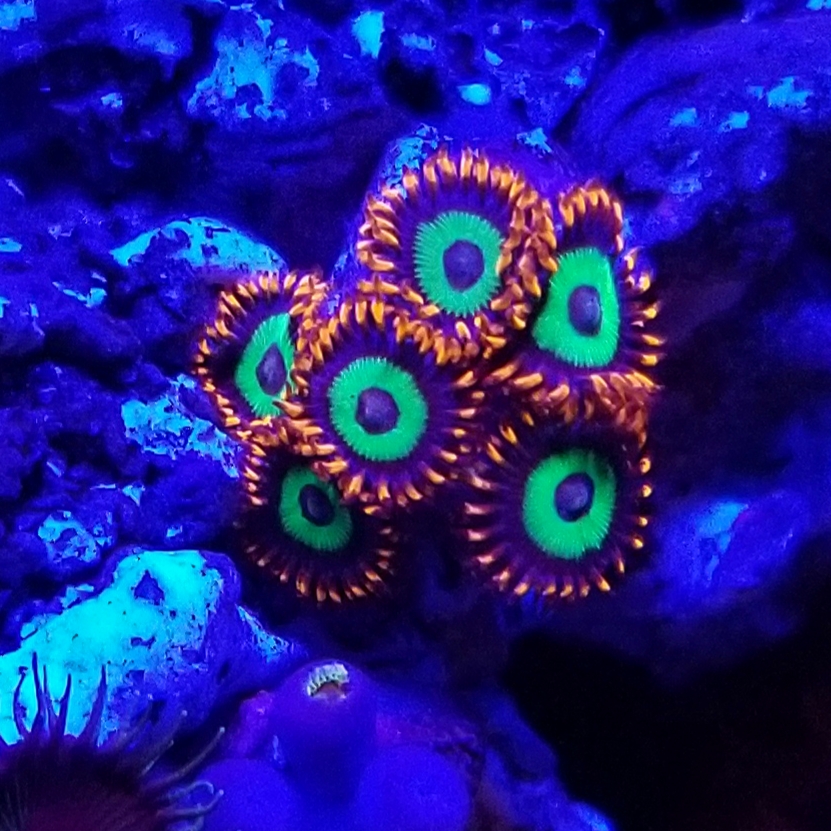 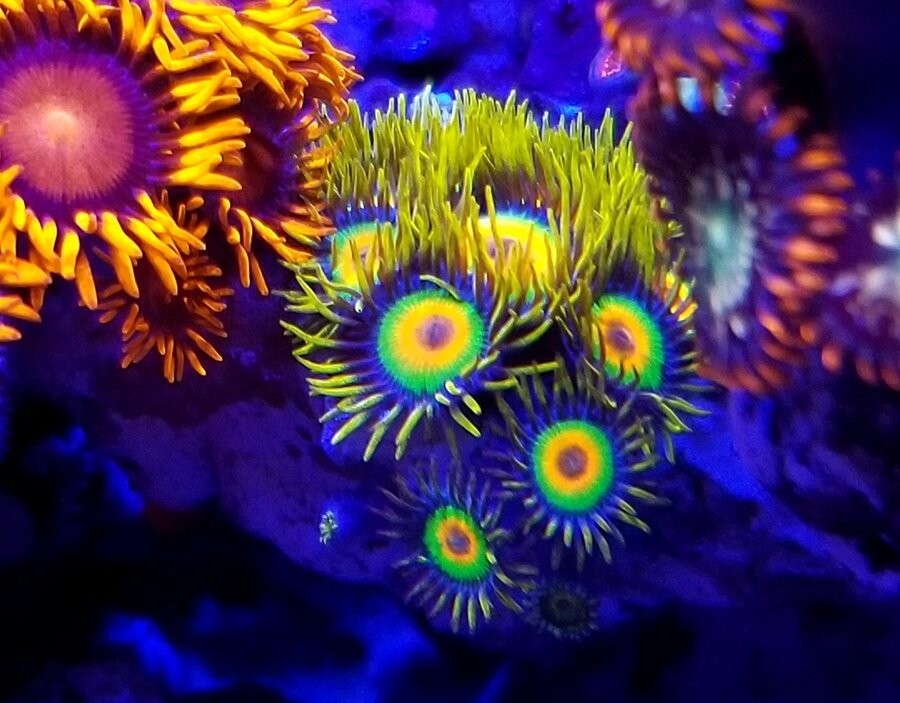 Rastas, these are the best colors I've seen in person on these. The blue edge and darker mouth area is quite visable and they are bright in all lighting. 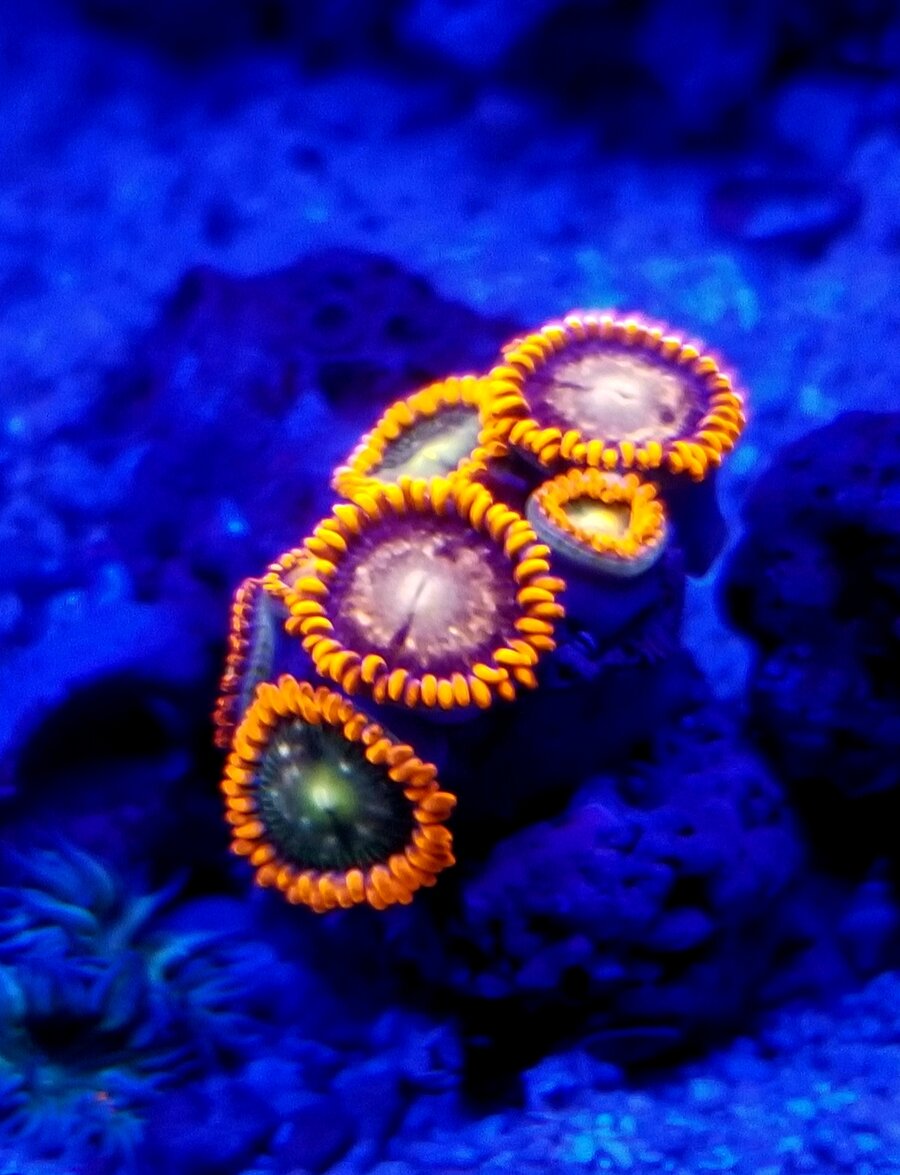 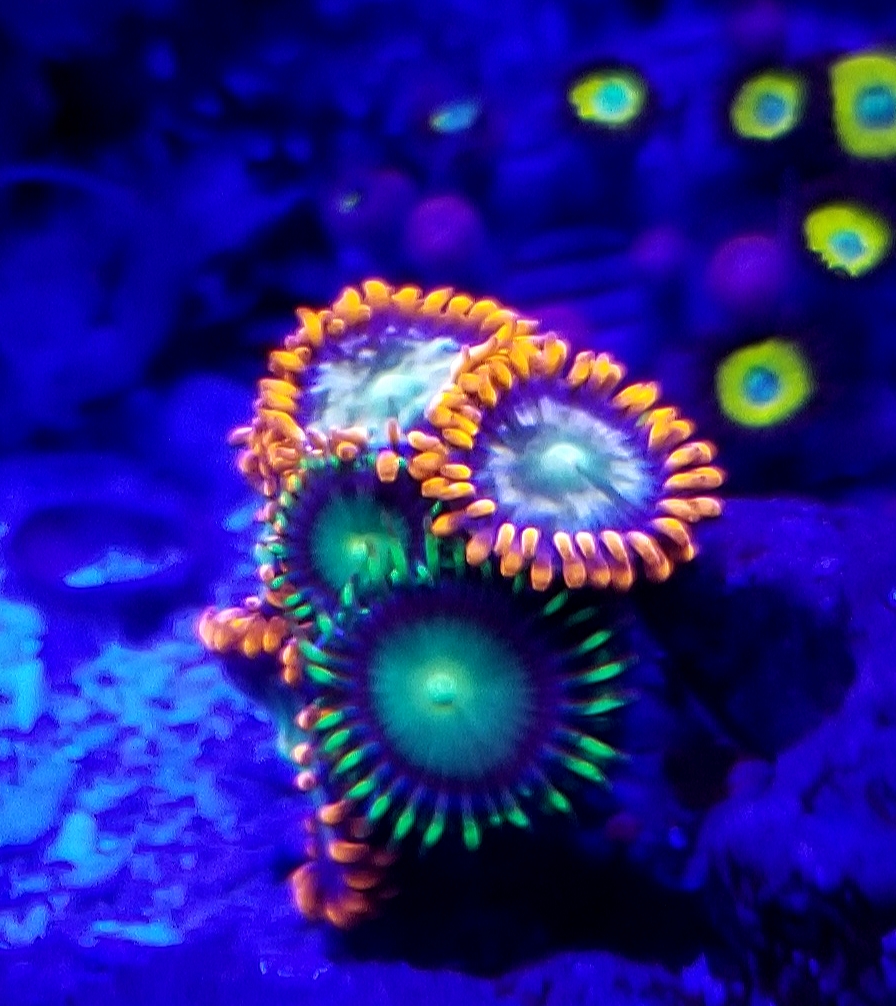 I ran out of room for pics on the previous post lol. 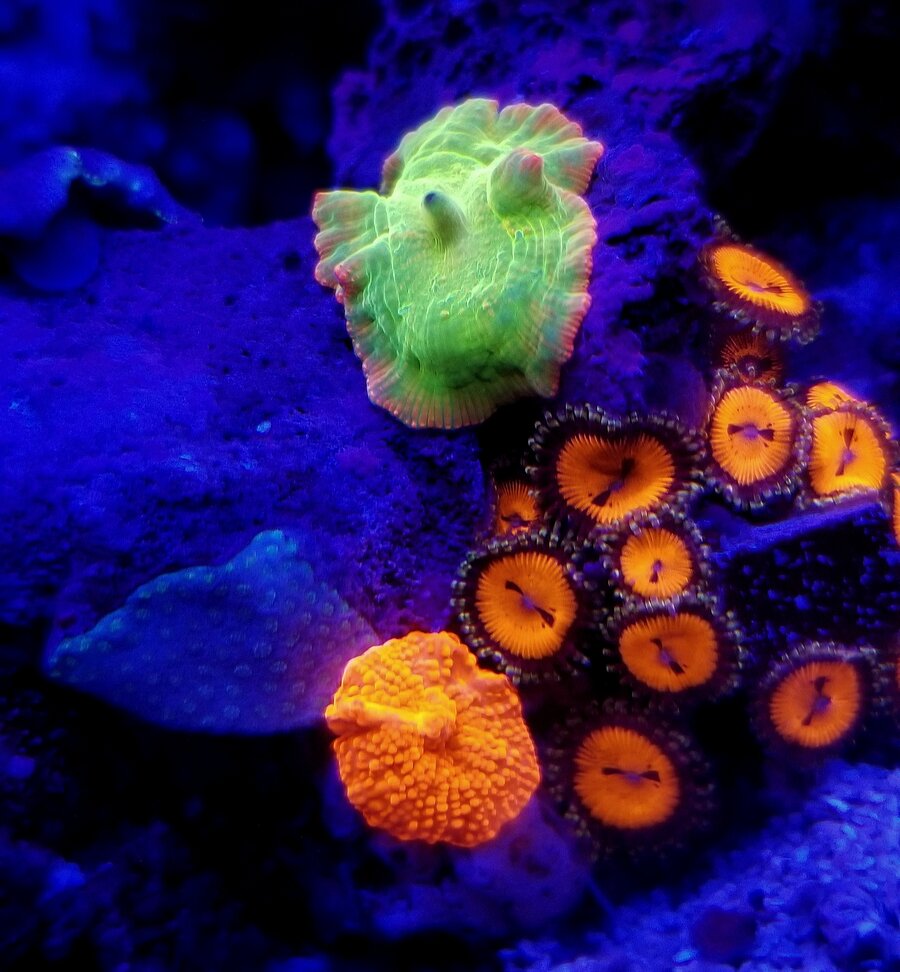 Rediculously bright shrooms. In person the orange one basicly glows under the blues. Hard to take a pic of it the camera casts an orange glare off of it in close ups.
All pics with only blues with orange filter.
Fish and squat lobster are still going strong. Squattie eats from my hand it keeps me from wasting pellets.<3 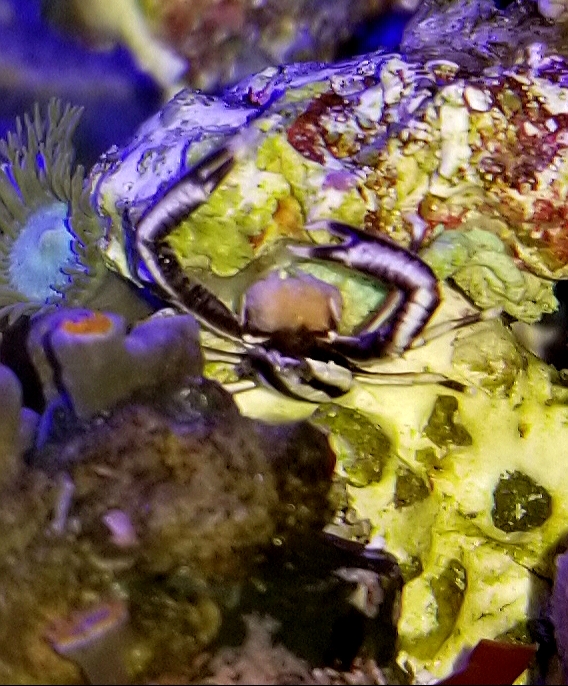 The fish (Mr. Marco Polo) I have yet see eat prepaired foods. It picks at rocks and I saw it tackle a scud and eat that viciously so I guess hes feeding on pods. Hes not skinny and I see plenty of them in the corners and on the glass so I think hes fine.
I do get some evaporation and theres no ato on this. I added a marker inside the pump chamber to keep track of how much I need to add every few days. Looks dumb but it works and it's been pretty stable. 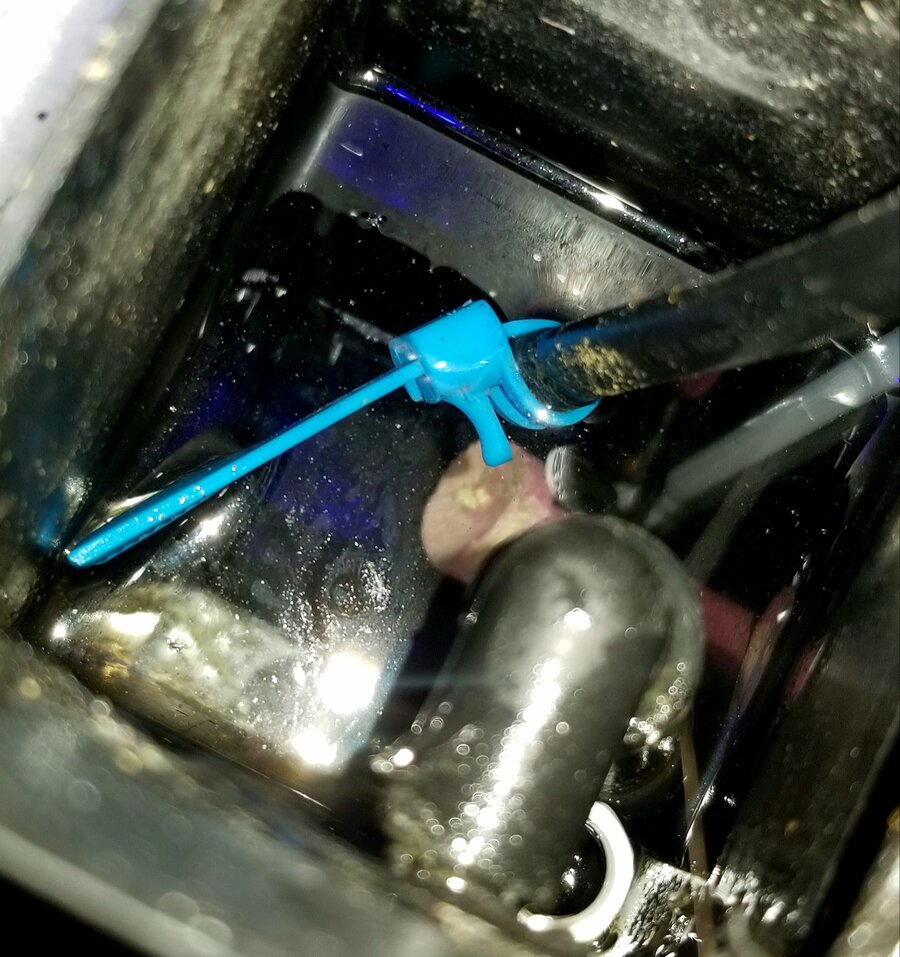 I really like that pink rimmed mushroom. I can't wait to see which zoas dominate the others in the next year.

I love that shroom but the 3 shrooms in here haven't grown much. The pink rimmed one is metalic looking in person I love it. My trash shrooms grew like mad when this was a frag tank. These nice ones hardly have done a thing. *shrug*
Last edited: Nov 15, 2022 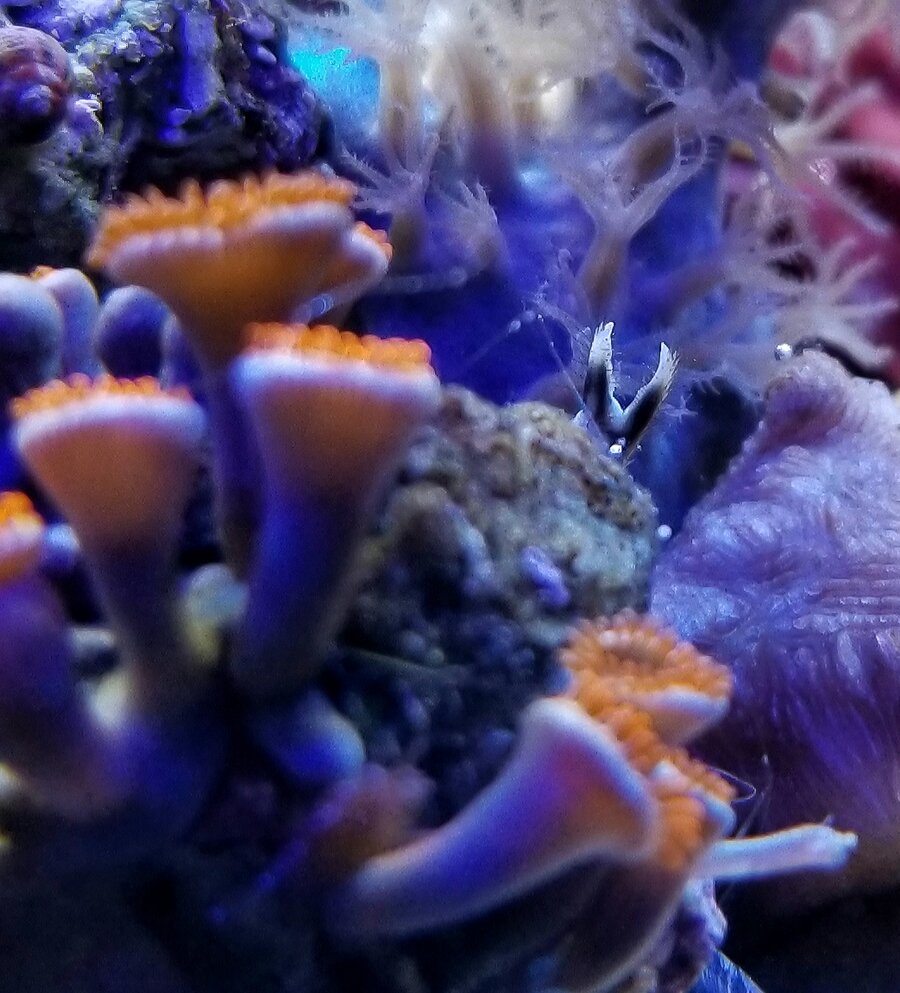 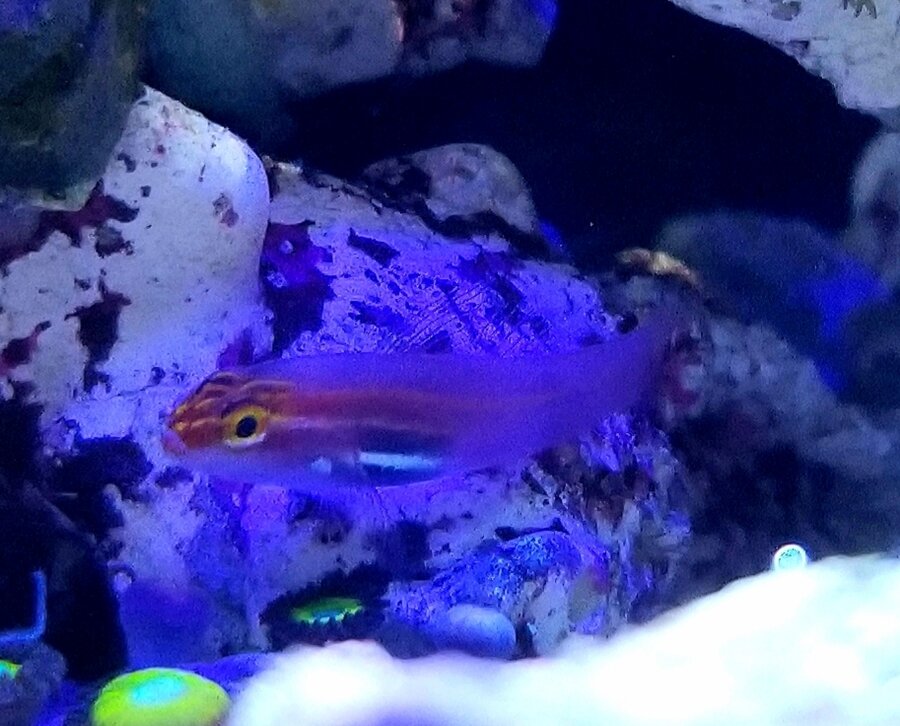 So tiny and fast. 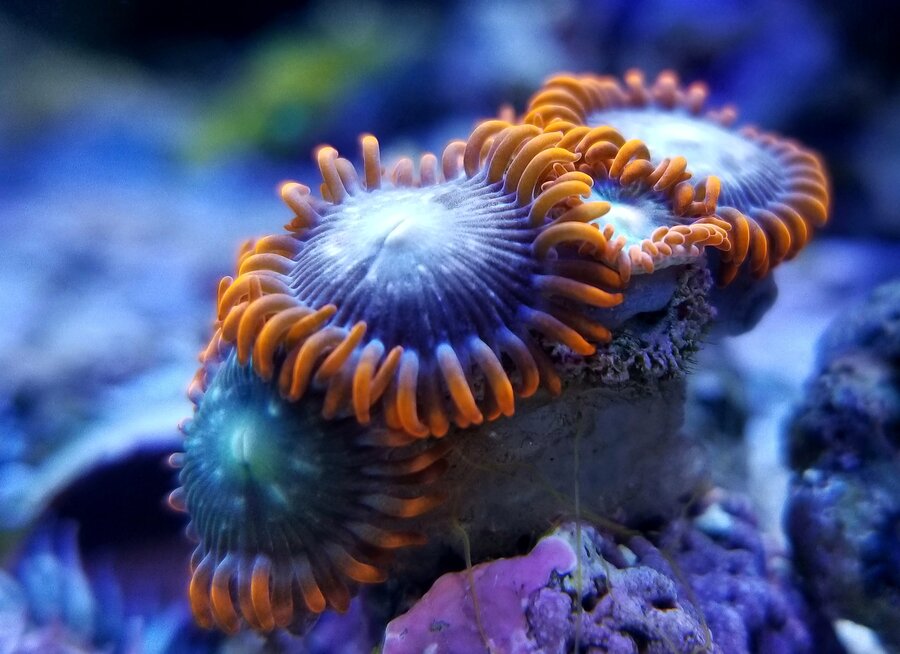 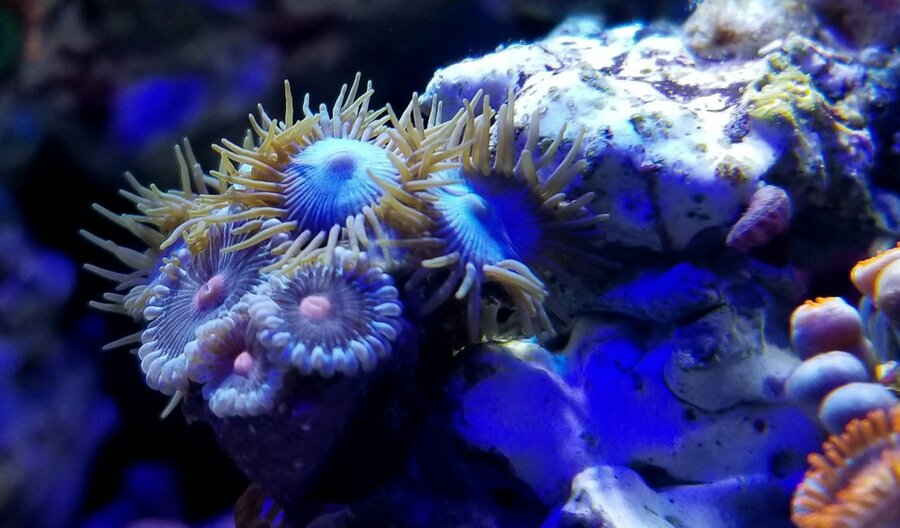 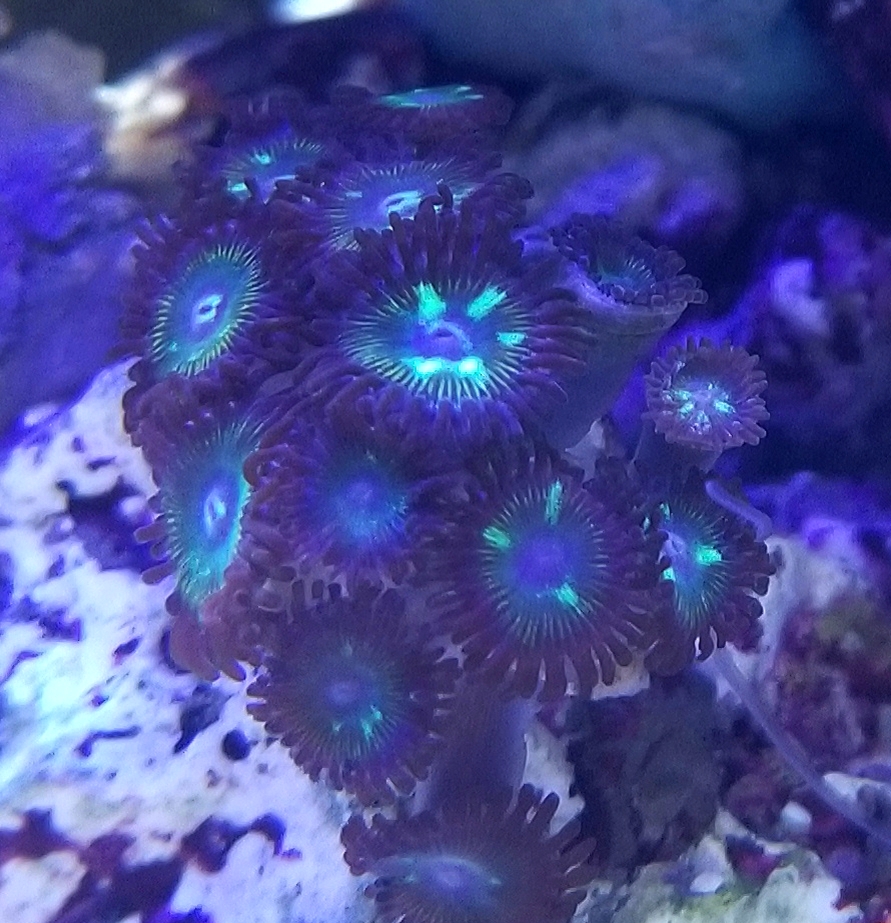 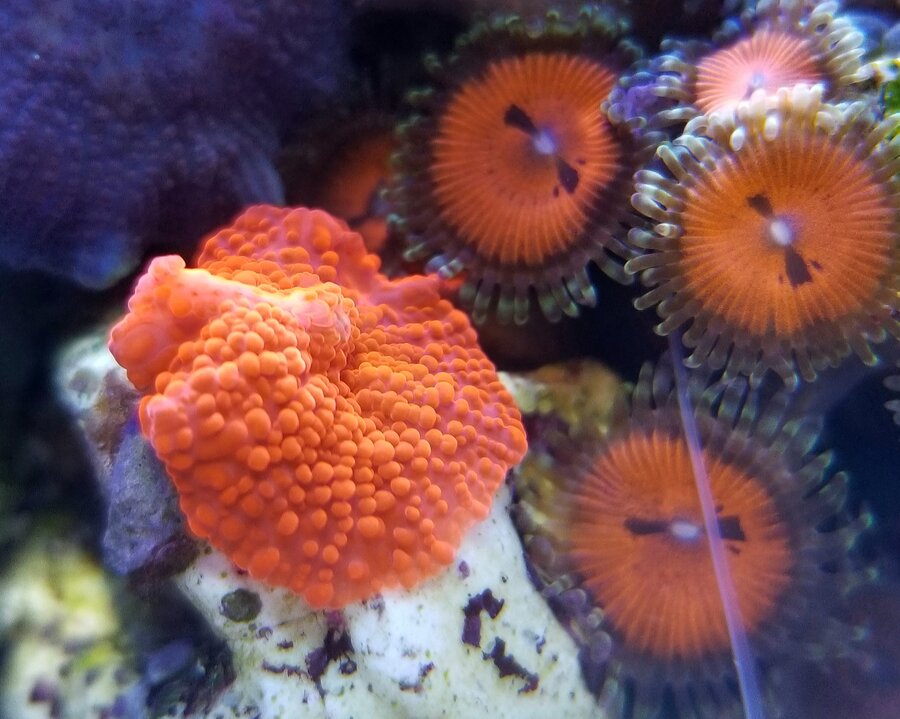 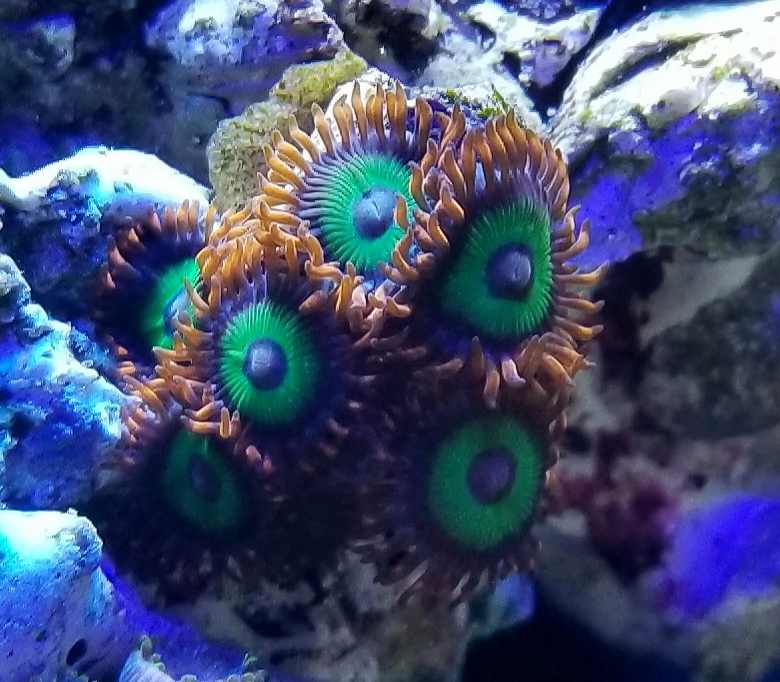 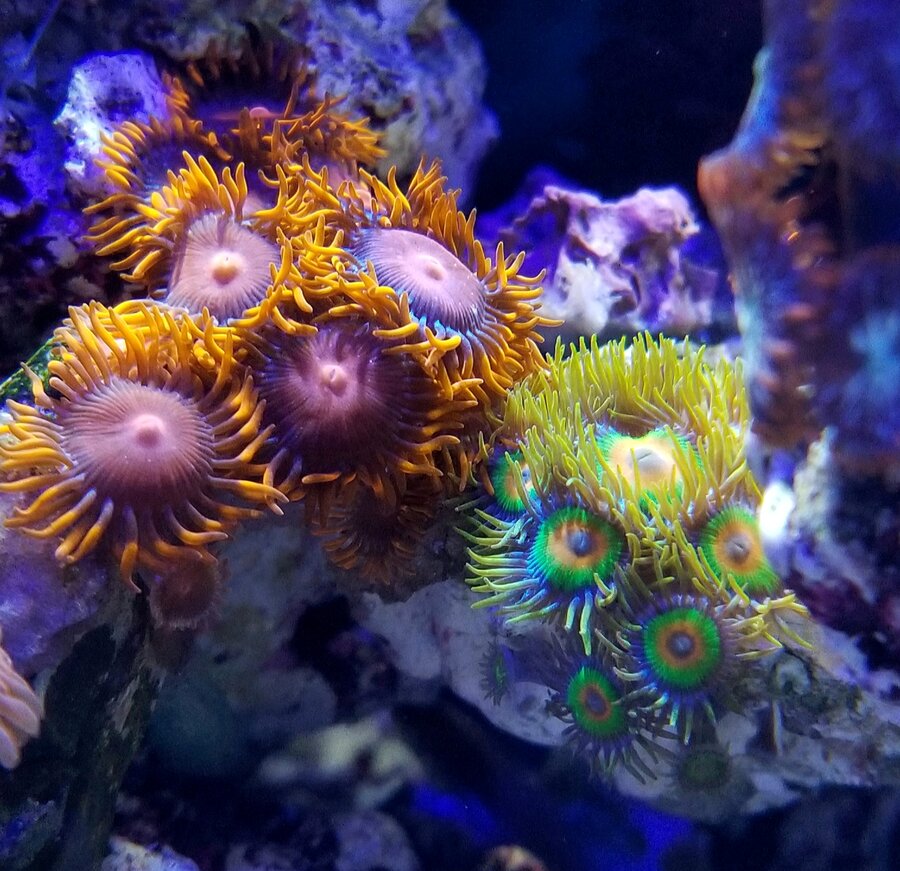 This little snail wants the squatties pellet and hes not giving it up.
Sorry for all blues he dosnt show himself if the other lights on and I didnt have time to grab the filter this was too cute.

EDIT: awe! The snail made him drop it and...the shroom is eating it. Hes was still trying to chase off the snail... I yeeted the snail to the other side and gave him a new one. He was very happy and was waving it in his claw at me before picking it appart. The snail went and buried itself in shame hahaha!
Last edited: Nov 23, 2022

Im getting some very very hard green flat algae on the glass. It's very hard to remove far worse than coraline or most of the green algaes that usualy appear on tank glass. I think it's the same kind that grows on the right side of my nuvo 20. It's hard to remove even with a scraper. It seems to like the side where the flow hits the most in this tank aswell. Took forever to scrape off and I still missed some.
The zoas are growing nicely. The frozen apples and the no name pink with white lashes ones have realy taken off suddenly. Kalidescopes, bam bams, rastas and scrambled eggs have all had prety steady growth. Fruit loops havnt done much yet I was looking forward to that one spreading.
Last edited: Yesterday at 8:12 PM
You must log in or register to reply here.
Share:
Facebook Twitter Reddit Pinterest Tumblr WhatsApp Email Share Link
Top