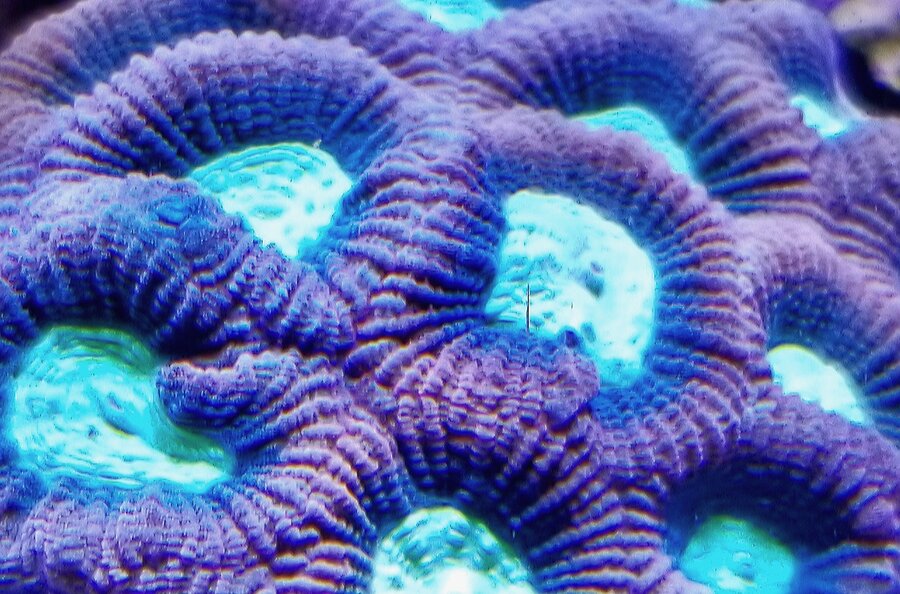 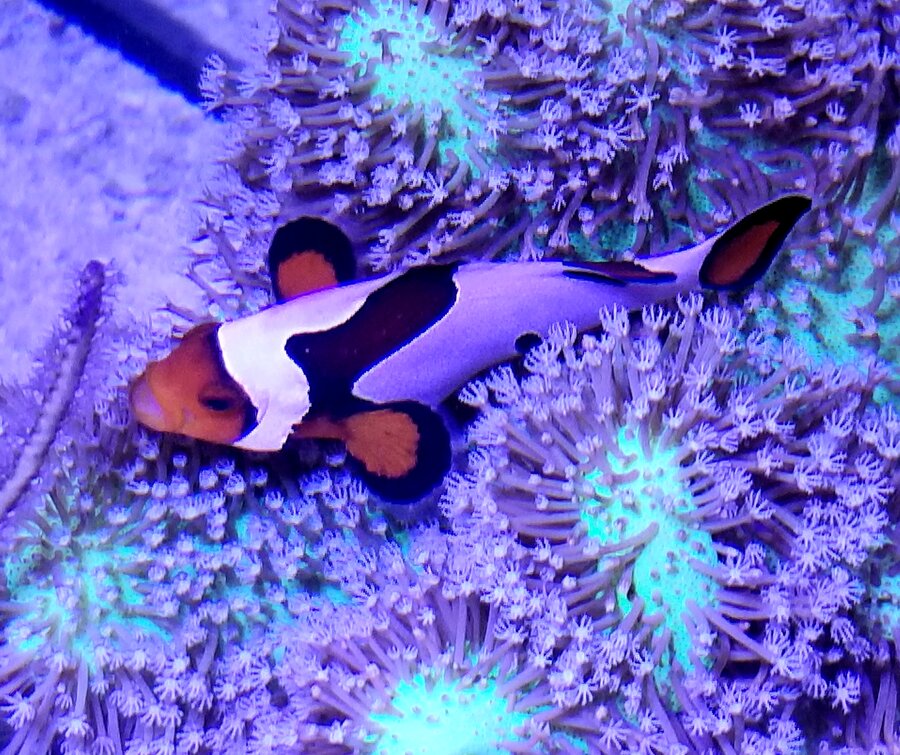 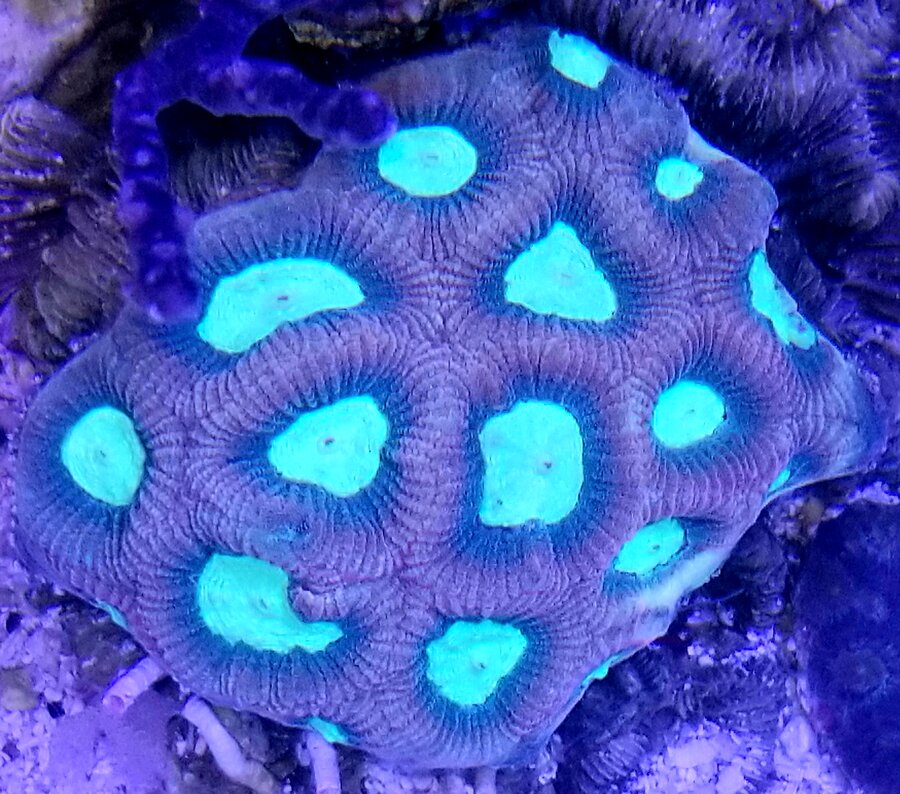 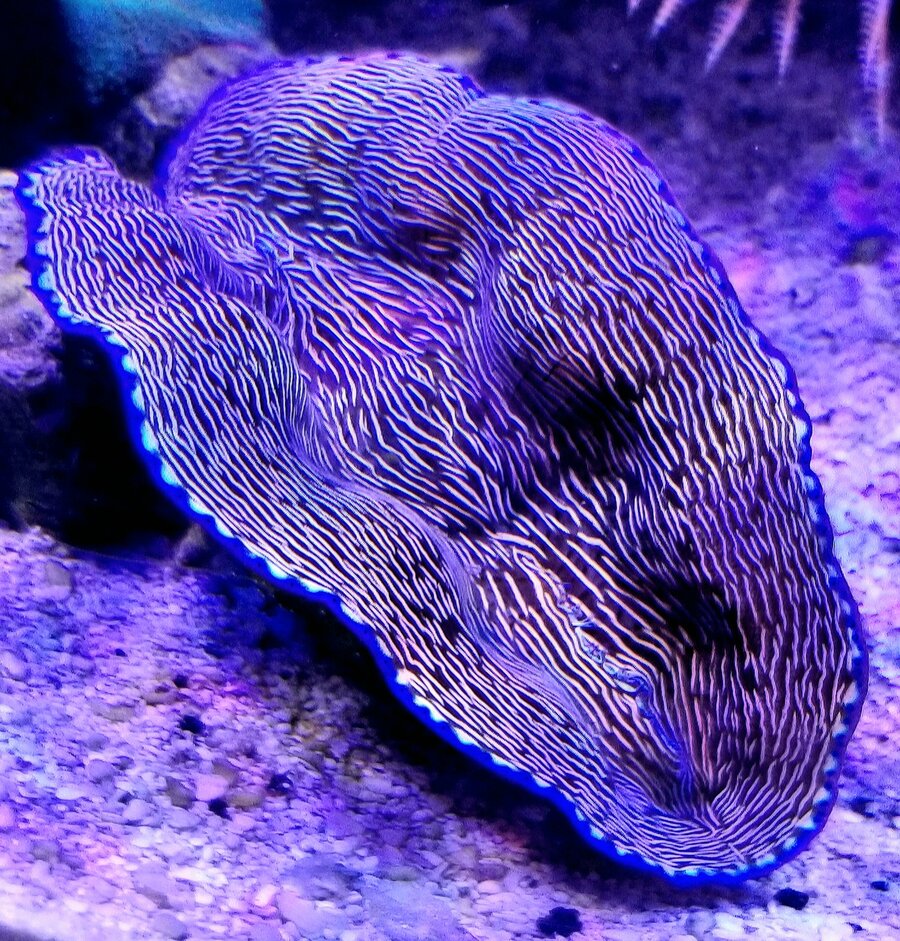 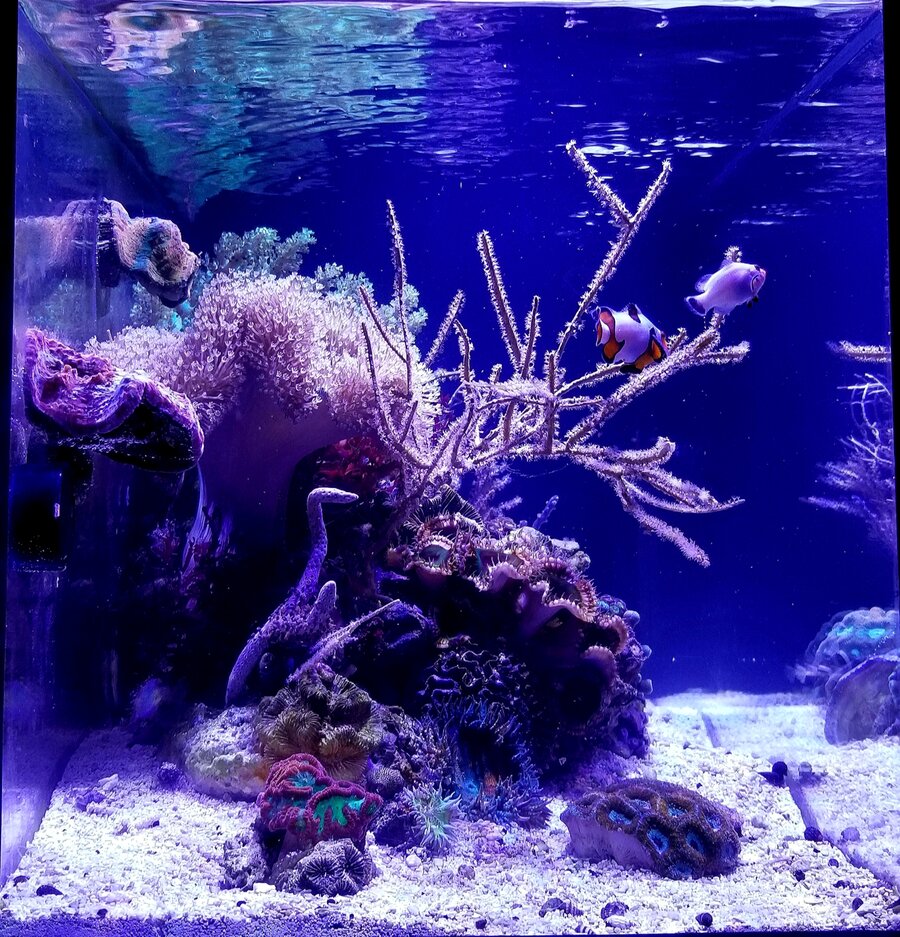 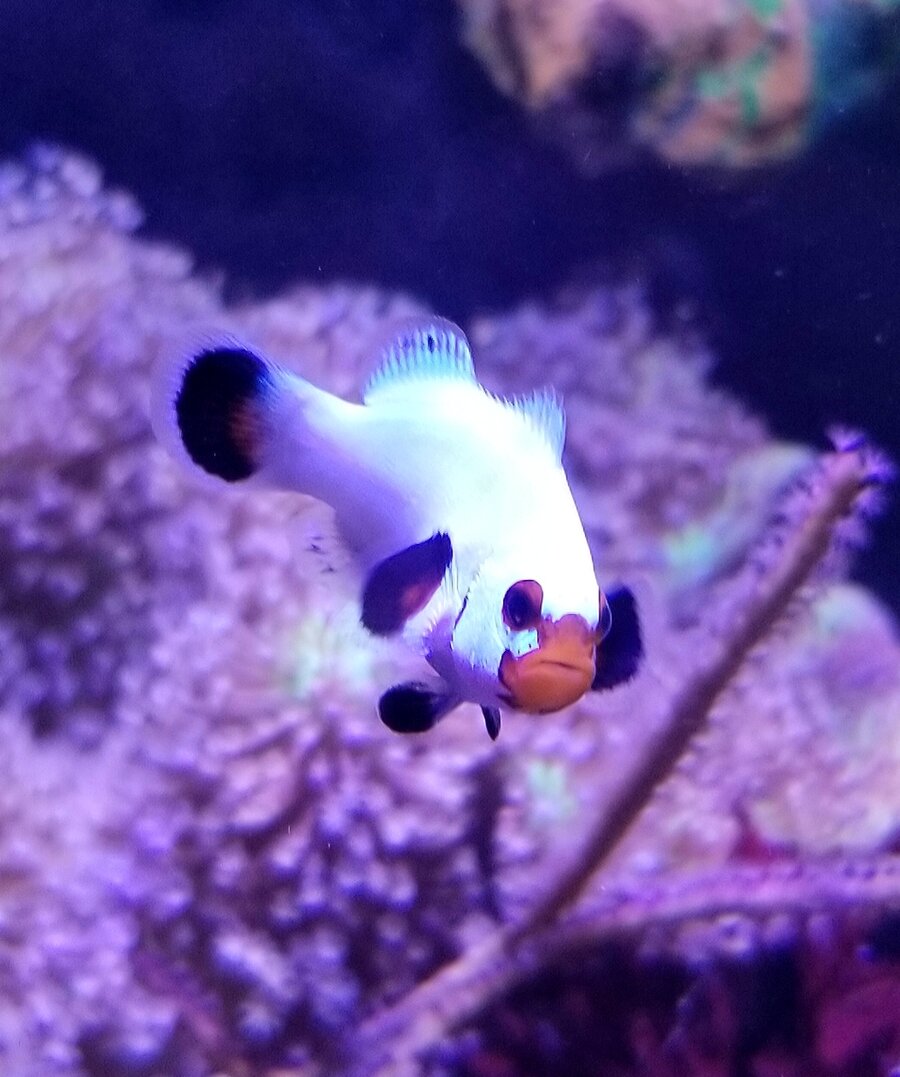 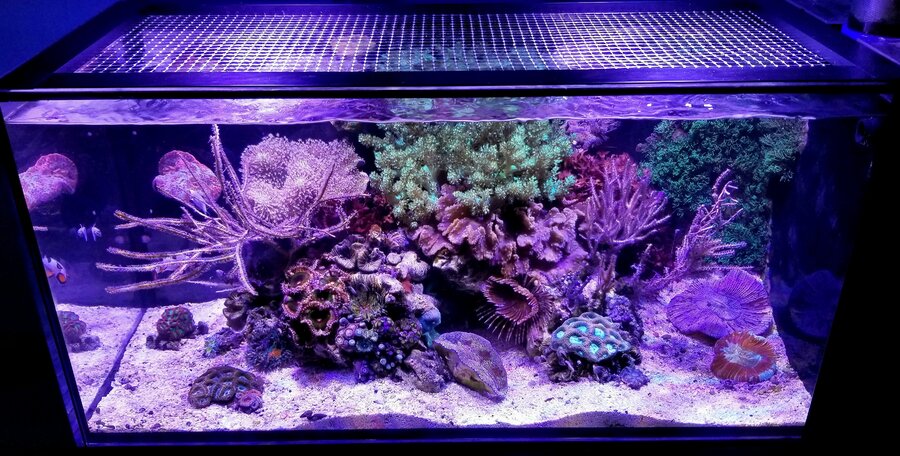 This was a huge picture dump. 3 posts to fit them all in the best ones are on the previous page. Ok last ones! Grandis plays are getting more green under these lights. 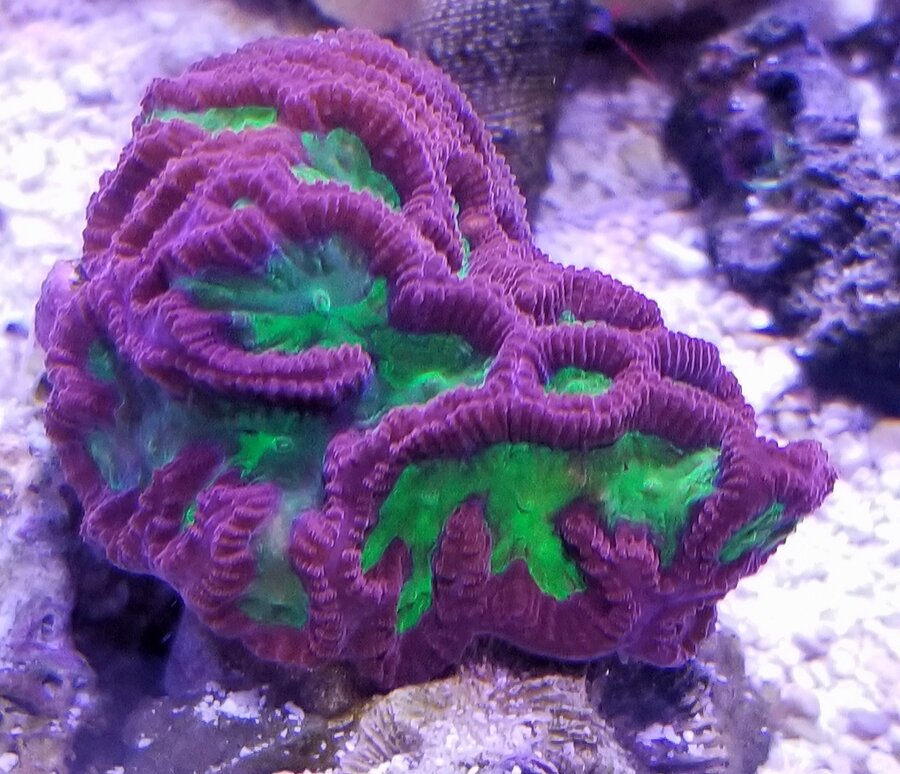 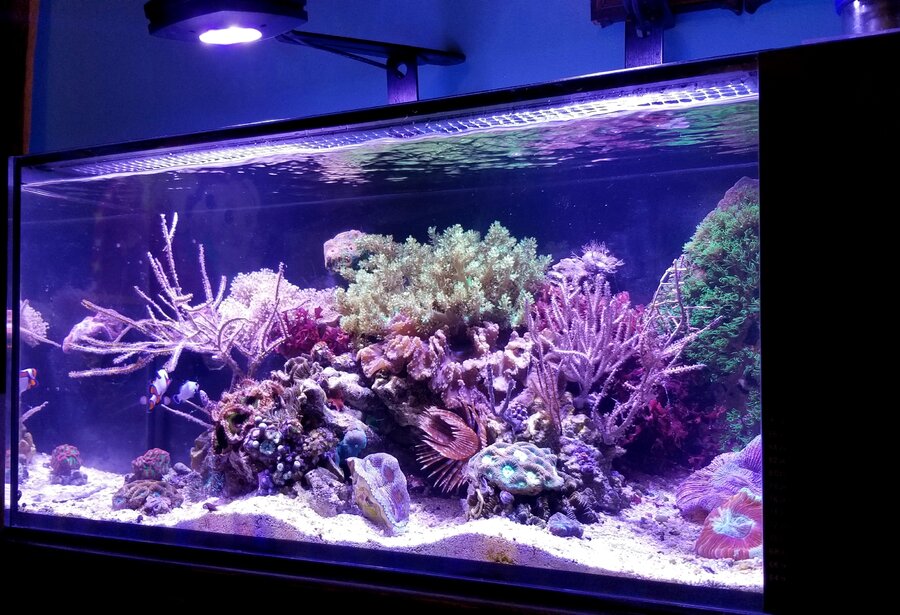 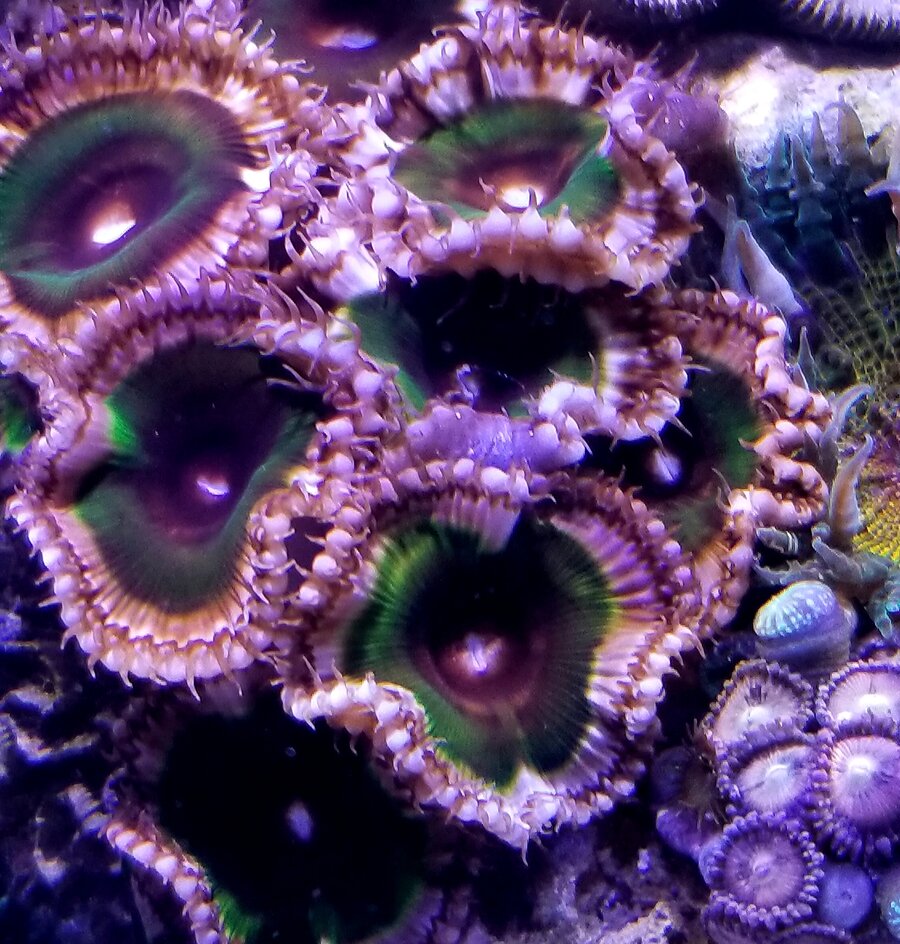 I'm gonna feature it on the Homepage again.

Looks GREAT! Is that 2nd coral from the top a chalice or an acan rotundoflora? Sometimes they can look rather similar. I really like the colors. It reminds me of pastel chalk paint colors. Anyone on LARC familiar with pastels for art projects?
Last edited: Jul 14, 2021

If you are talking about the orange one it's a chalice. Isnt a rotundiflora a plant?

Lazyfish said:
If you are talking about the orange one it's a chalice. Isnt a rotundiflora a plant?
Click to expand...

I was mistaken. Some chalice corals look so similar to an acan echinata as shown in this article below: 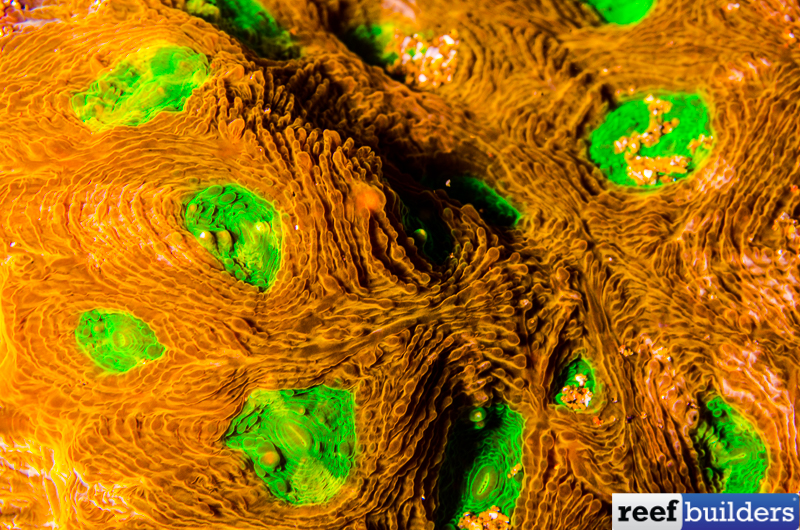 The TRUE Acans, Acanthastrea echinata, used to be the norm few years back. They were abundantly shipped from Indonesia in a huge range of colors but are now very rarely found from Australia…
reefbuilders.com

When I got this coral below, I thought someone told me it was an acan rotundoflora. I am not sure of the spelling. This one surely does not look like a chalice.

This is a good source for classification:

I've allways thought it was a chalice. That's what I bought it as and it looks more like a chalice to me. I suppose it could still be acan echinata the two look so very simmilar in some cases. It gets along with my red and green one. They dont sting one another but the red and green one is a much more agressive feeder and usualy has some very short sweepers at night. So they may not actualy both be chalices you could be right. This one rarely even has feeders out. If its anything other than a chalice I would say probly acan echinata. I dont think its rotundiflora I just looked it up. Sevral descriptions also say they usualy have a burgundy or pink base dont know how acurate that is.I had never herd of a coral called rotundiflora untill now a rotundiflora is also a type of plant. Learn something new all the time!

That picture looks just a little bit like some kinds of cyphaestrea when they are closed. The coralites seem more regular than what I saw in my initial search for rotundiflora.
Last edited: Jul 13, 2021

I like your taste in corals! I believe I missed it but what are you doing for algae control?

Not much realy. I try to do 5g water changes every 2 to 3 weeks sometimes it ends up longer. I clean the glass every 3 or 4 days. I have a variety of snails and hermits. When I'm over due for a water change sometimes I get a tuft or two that will try to get on the grubes gorg. It's easily removed and it's not like it comes right back or anything. Same for the other 20 but that one is way over due for a water change right now glass needs wiping every 2 days. And theres just a bit of algae on this one rock but it's like some green film and easily removed and not a big deal. The macros help absorb excess nutreants it helps out compete the other algaes. I used to run plants in all many tanks for this very same reason in one tank I had saw blade macro and only ever had to wipe the glass to keep the coraline off. One of the reasons I am looking for this particular macro. It did however require frequent pruning to keep it from going sexual. Even without the macros I didnt realy have algae problems in my other 20g but I was cleaning the glass more I'm running a small bag of carbon a oversized bag of chemipure blue and filter floss. Floss is changed weekly and chemipure and carbon every other month. I have the skimmers too but half the time they are not on usualy run them a week after water changes but I haven turned them on in probly 2 weeks now. I've allways upgraded tanks from my first tank back in about 2005-06 some if the corals and even a few rocks I can trace back to the original tank. I imagine I have some old and well established bacterial strains and sutch too idk if that has anything to do with it.

Lazyfish said:
I imagine I have some old and well established bacterial strains and sutch too idk if that has anything to do with it.
Click to expand...

I heard that having very well-established, aged live rock does make a big difference rather than going with the dead rock and starting from scratch with bacteria in a bottle. The latter method does help prevent the headaches of unwanted hitchhikers.

Just ordered what is probably my final batch of corals for the penensula tank . Now just tolet things grow in. I will focus on getting the pink streak wrasse and a peppermint shrimp or two for the tank now that the corals are done. The only other coral I want for this tank is a certan mushroom that i can never find in stock.

After that's done I will probly try to focus more on the other tank and obtain a large Fiji yellow toadstool for the standard 20 and some more varieties of mushrooms. If I can find the one shroom I'm still looking for the peninsula tank I will probly propagate in this tank to get a bunch be before putting some in the peninsula

Got the corals from aqua sd.
I ordered a small but nice teal, yellow and red colored trach with a hint of orange. A 4 polyp deep orange acan a bright orange pavona and a single polyp fat head dendro. I got a unknown zoa as a freebie idk what it is possably has a greenn skirt and I see some orange showing starting to open up. Dendro trach and acans all ate imeadiatly..idk about the pavona I dont see any kind of reaction but its litteraly just finished acclimating and being placed about 15 min ago. Its now truly a fully mixed reef with softies gorgs macros lps nps and sps coral. I hope I can keep the pavona going never tried one suposed to be an easier ish sps variety. I'll probly do pics monday I have to retake the ones for that article anyway they weren't focused enough but my camera shots were worse than my phone...oh well. I'll try again

Im.seeing new growth on my reverse prism favia my acans and alot on that um...favigyra thing still up in the air as to what it is. The coralites appear to have distinctly separate septal walls deviding them but the growth is irregular many are elongated with multiple mouths others appear to be individual coralites and some appear to be forming walls between each part of the elongated coralite that has a mouth. It looks alot like some war corals in color but the way the polyps are growing idk I've seen identical pieces labeled as both favia, and platygyra so I have no idea. Its aggressive tho up to 3 inch sweepers some nights. 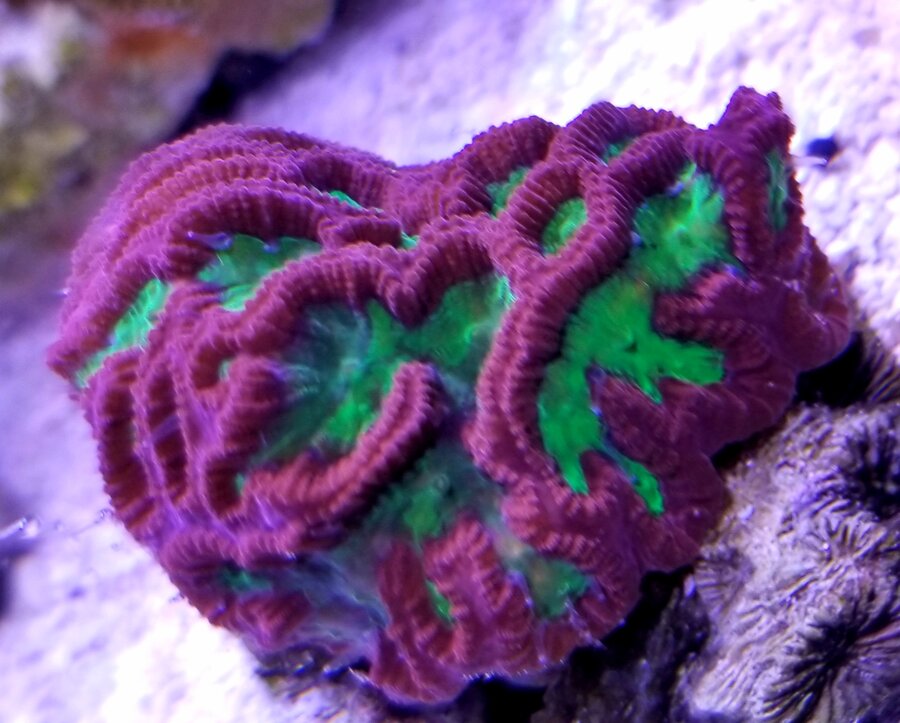 Looks like 2 types of zoa ones is green bay packers about 5 or 6 polyps and posibly 2 or 3 polops that havent opened and look like they could be diffrent. Decided to take pics of trach and acan I imagine they will be super fluffy in a few days. 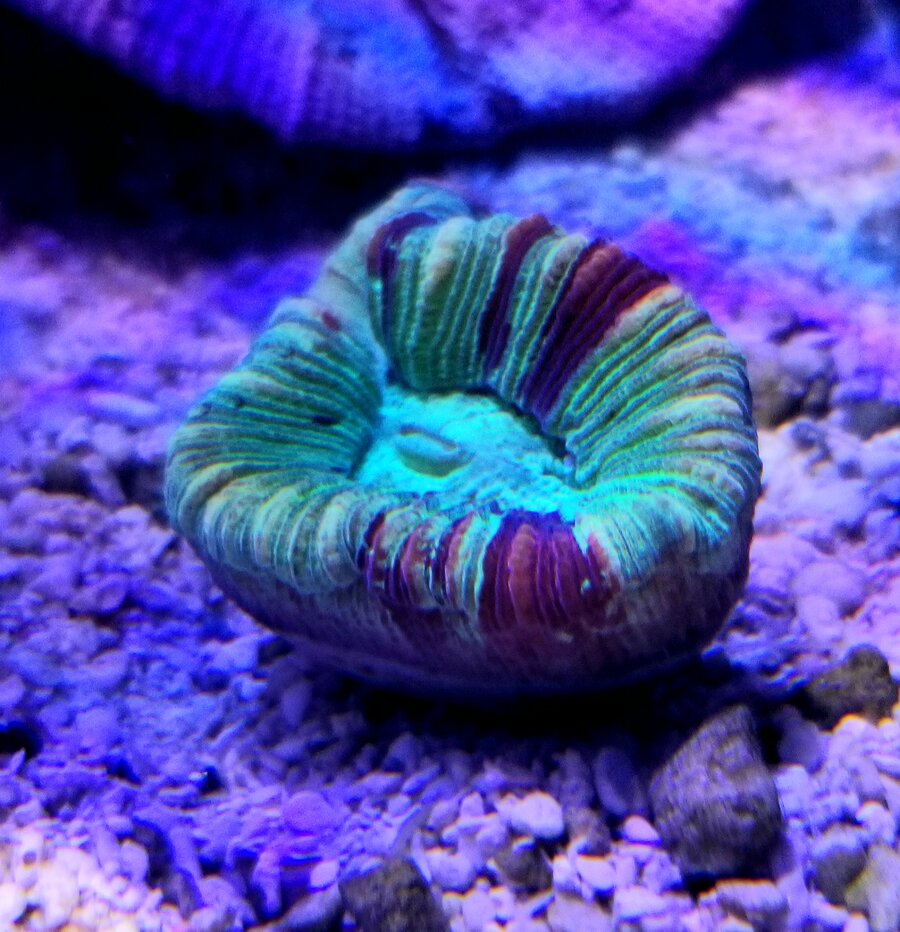 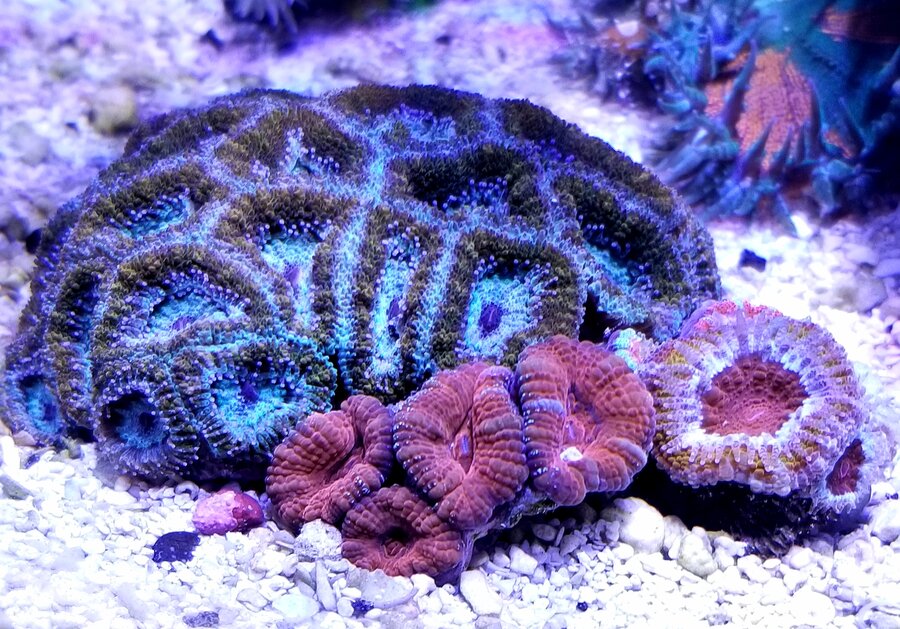 Looks like this dendro head is alredy trained. Open when lights on and closed when off. Hes under the arch in my tank by my duster so its not blasted with light but is definitely reacting to it by closing when its off.

Just came home to my pavona being engulfed by my rfa...looks like it was trying to eat it...some of the tissue sloughed off when I pulled it out..I guess its ben in there a while...I guess the glue didnt hold. It didnt look happy.