Stomatellas are spawning again just caught them at it.

The derasa has been hosting the clowns...it dosnt seem to care.
While cleaning the tank I noticed the mantle retracted normaly but the shell remained fully open. I touched the clam sevral times in the middle and it rippled its flesh away from the touch (feels very strange) but otherwise didnt seem to care and remains open. It quickly expanded back out once I stoped aggravating it.
I dont make a habbit of poking at my clams was just curious.
I think it's getting desensitized...maby? It seems fine otherwise no gaping or abnomal looking spots..the shell is growing well and its forming flutes on the shell. I read that is not a common thing for derasa in the wild but under high light and optimal growth conditions they can do this. 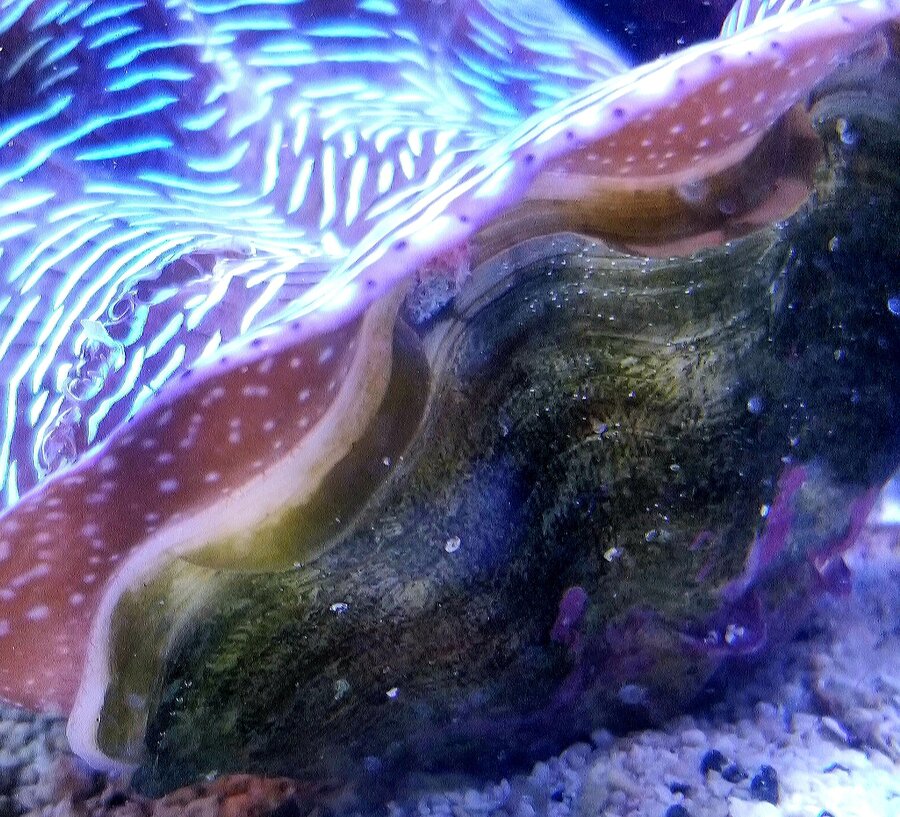 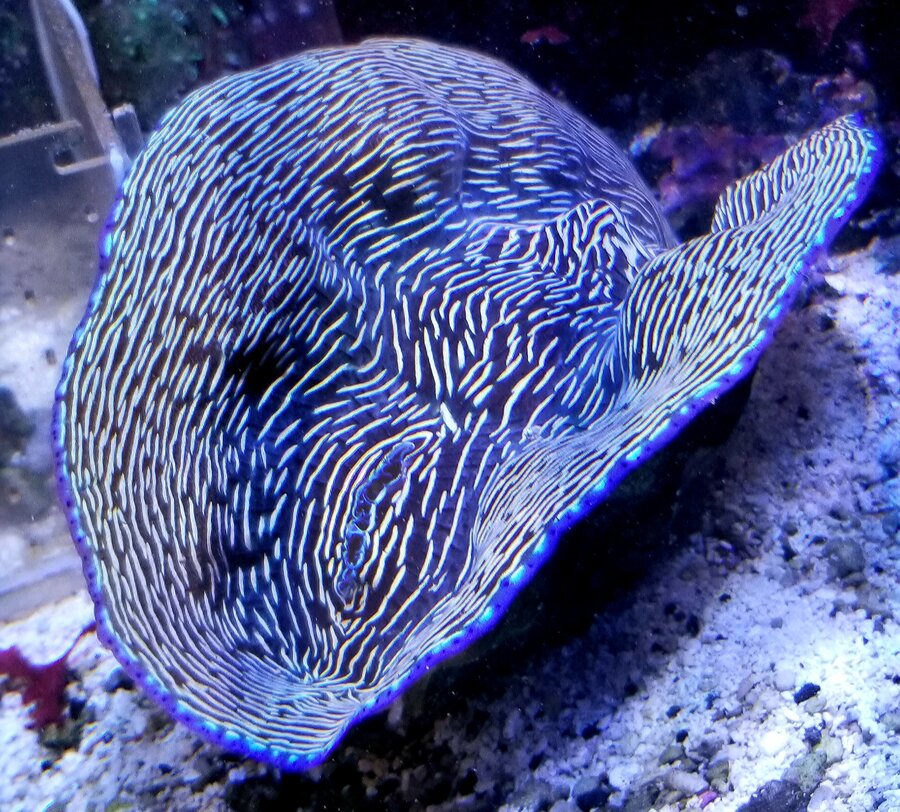 Curent fts on both 20s. The box in the standard has a few loose shrooms I'm trying to keep corralled untill they attach.
The conjoined twin rfa is still hanging out. Slow grower but starting to pick up. The two heads are slightly difrent if you look caredlfully. You can actualy see the conjoined shared tenticle between them. 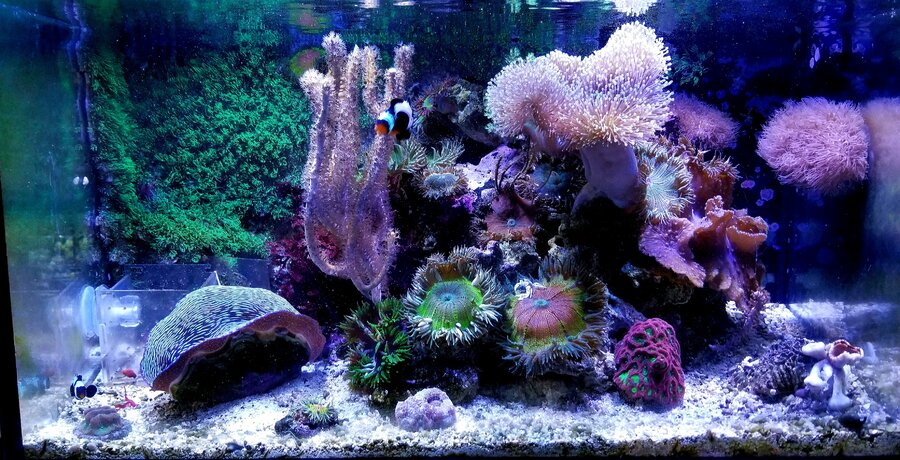 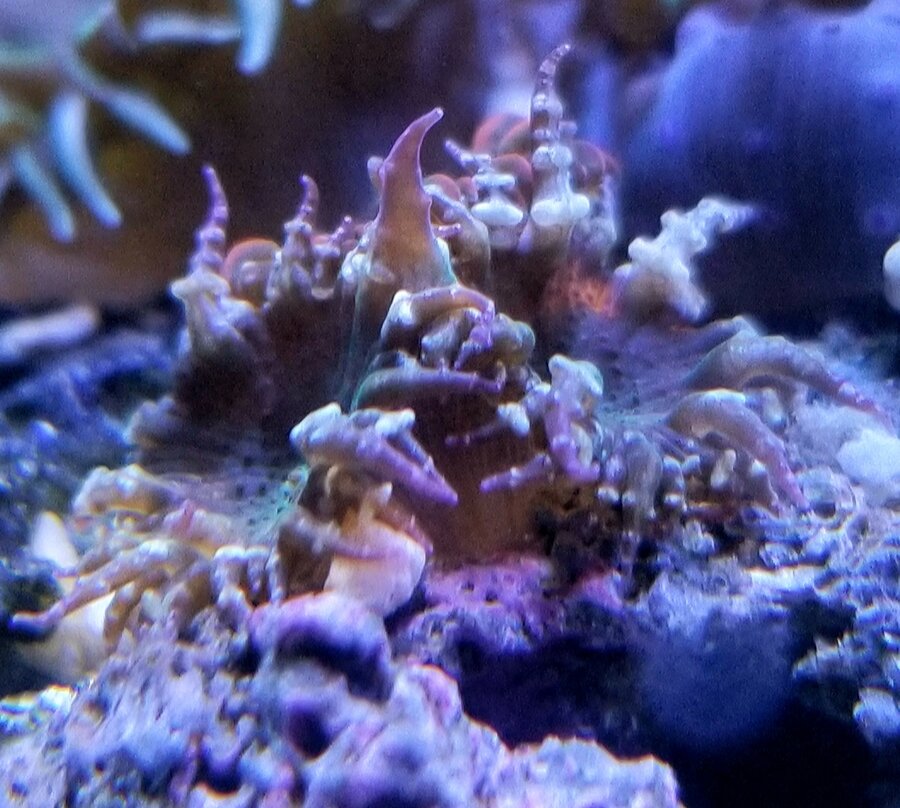 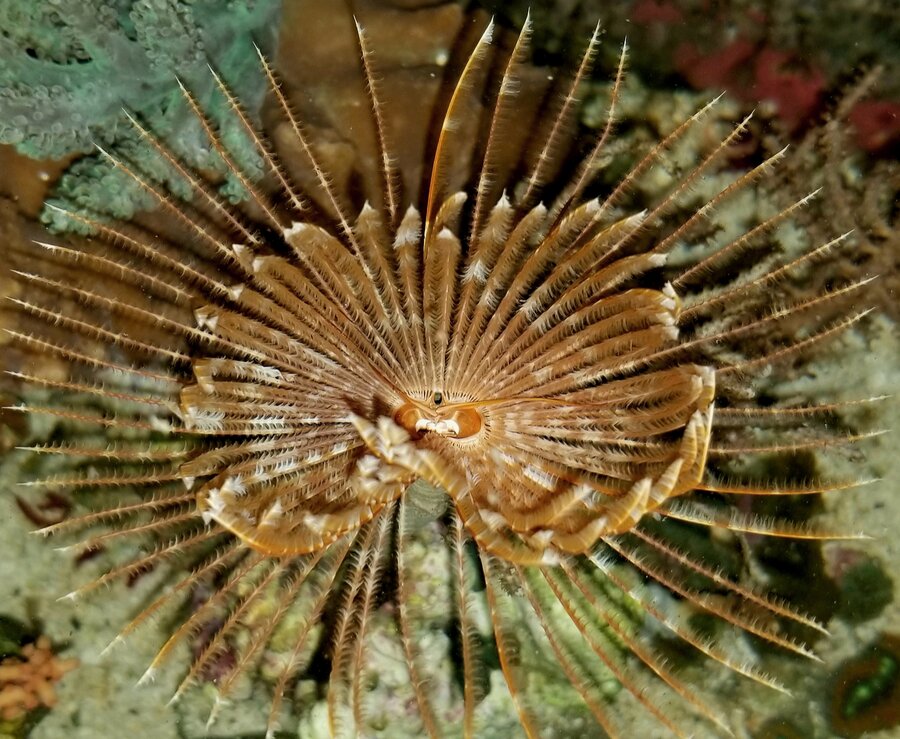 Hes getting huge almost reaches the top of the tank now.

After the problem with alk/ph a few weeks back my bizarro cyphastrea looks like it's dead and my branching cyphastrea lost some tissue but is recovering. Everything else looks fine so far.
Got some not so new guys that I dont think ive mentioned...I got most these after my last post. I've had this rhodactis longer. Dont beleive I've shown it much if at all it did bleach a bit after being added. It was it's under radions where I got it at so that was unexpected. 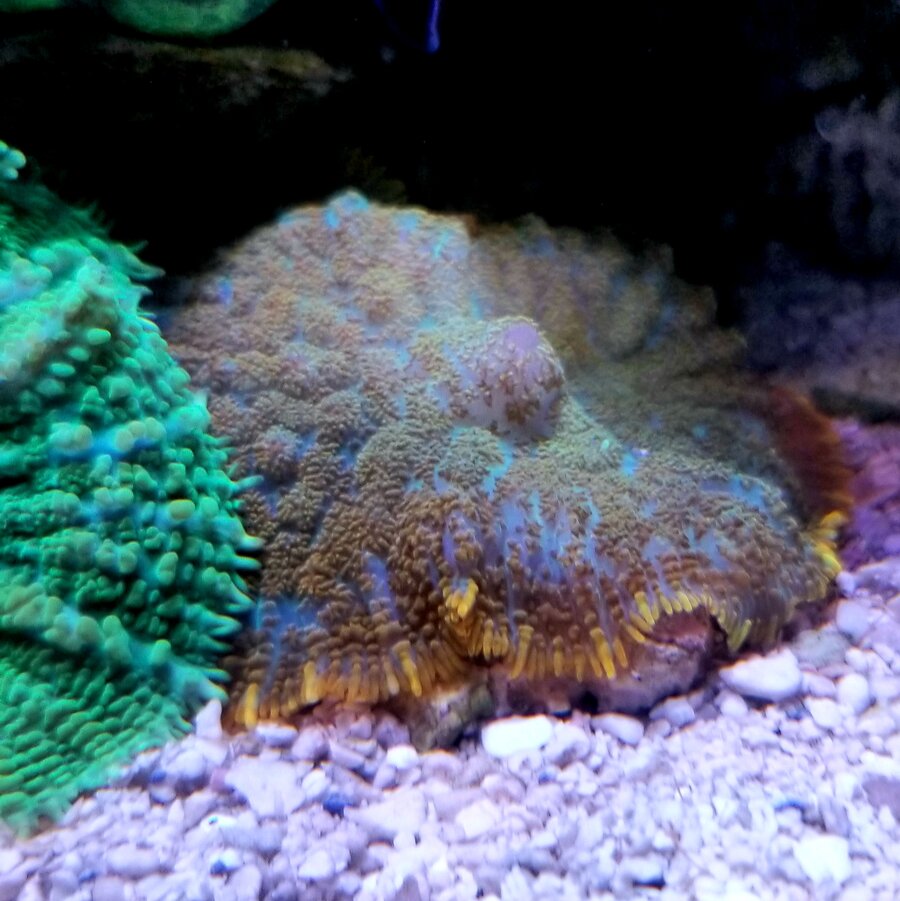 Scrambled eggs. This is in the 3g frags tank at the moment. A small bit broke off and it's in the peninsula. It's just opening for the day in this picture but curently has fully open polyps this one has very nice rich color compared to my last frag that the asterina ate up. 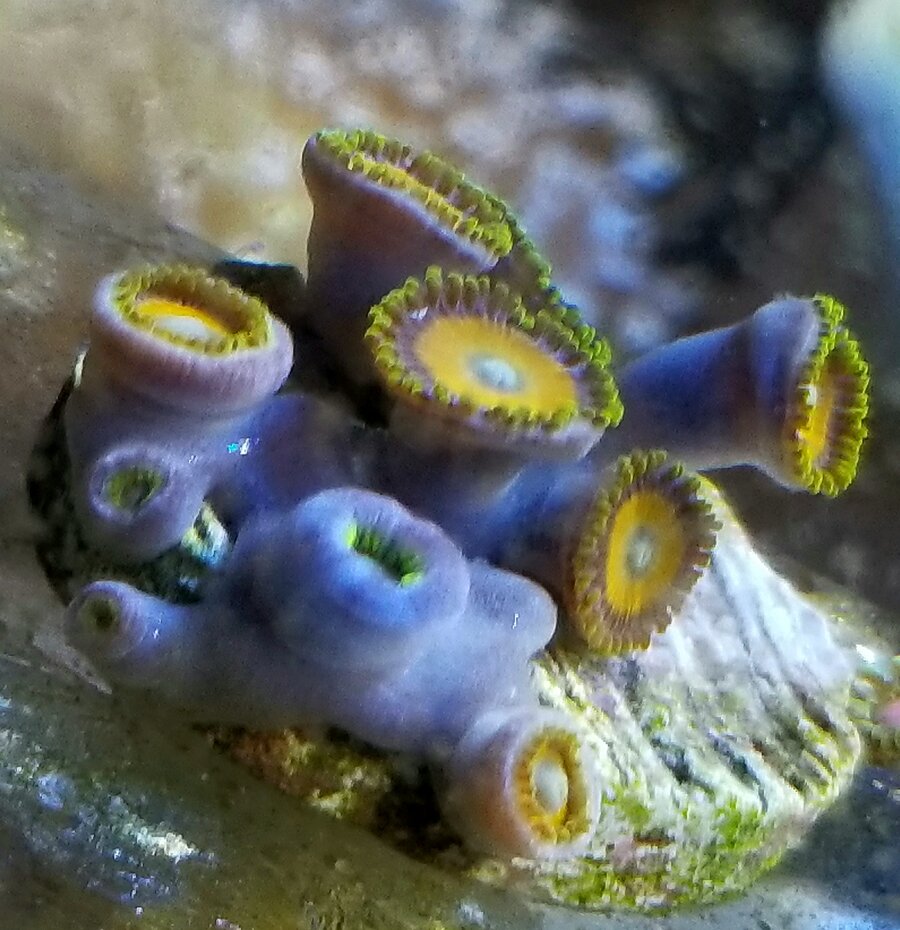 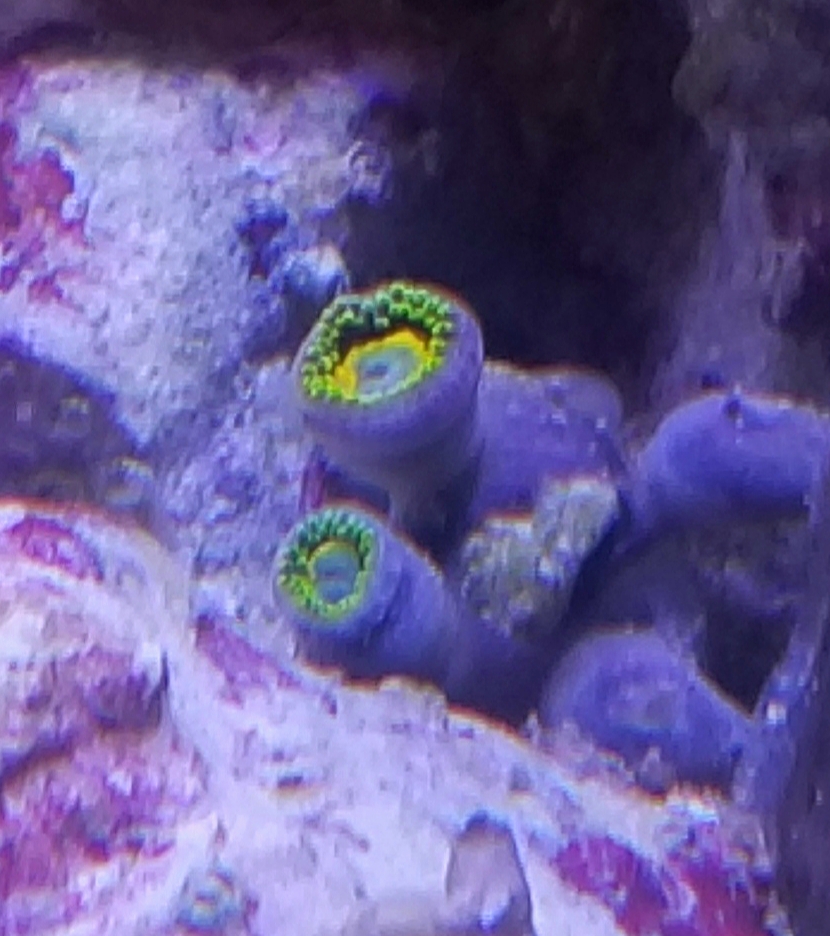 John deere leptastrea not showing much green...It's very yellow. May get more green as it develops. 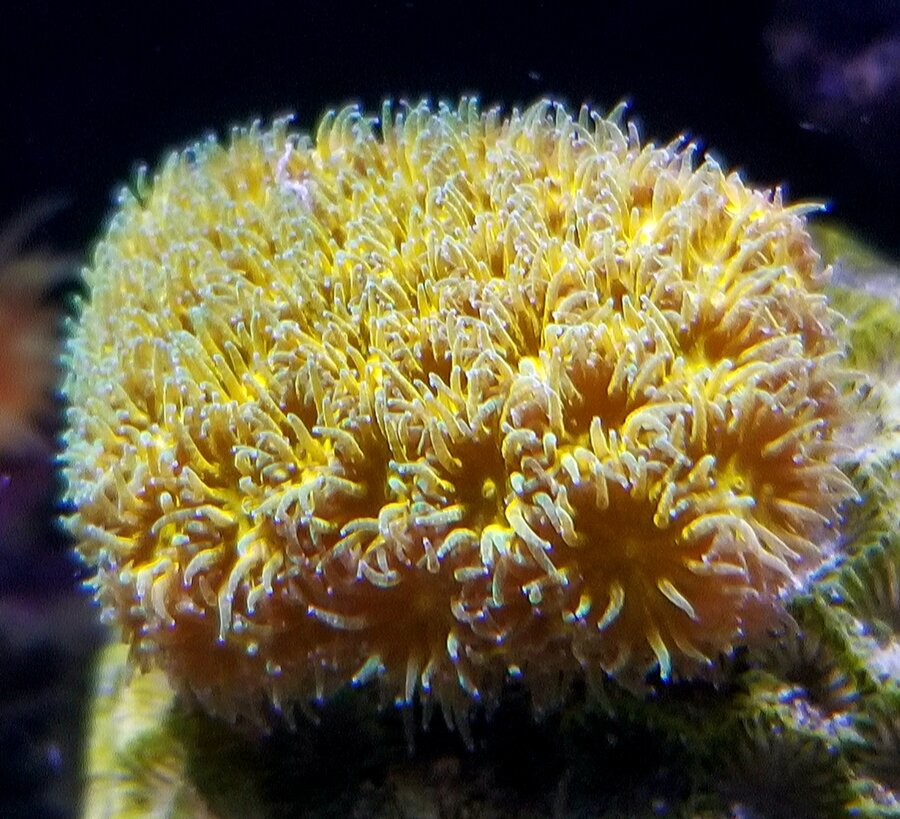 I managed to source a new piece of the holy grail at a good price the other piece is still alive but almost not. Nothing I do seems to make it better I think it's just prolong its eventual demise. The piece was never healthy to start and got stung badly aswell and it's just gone down hill. 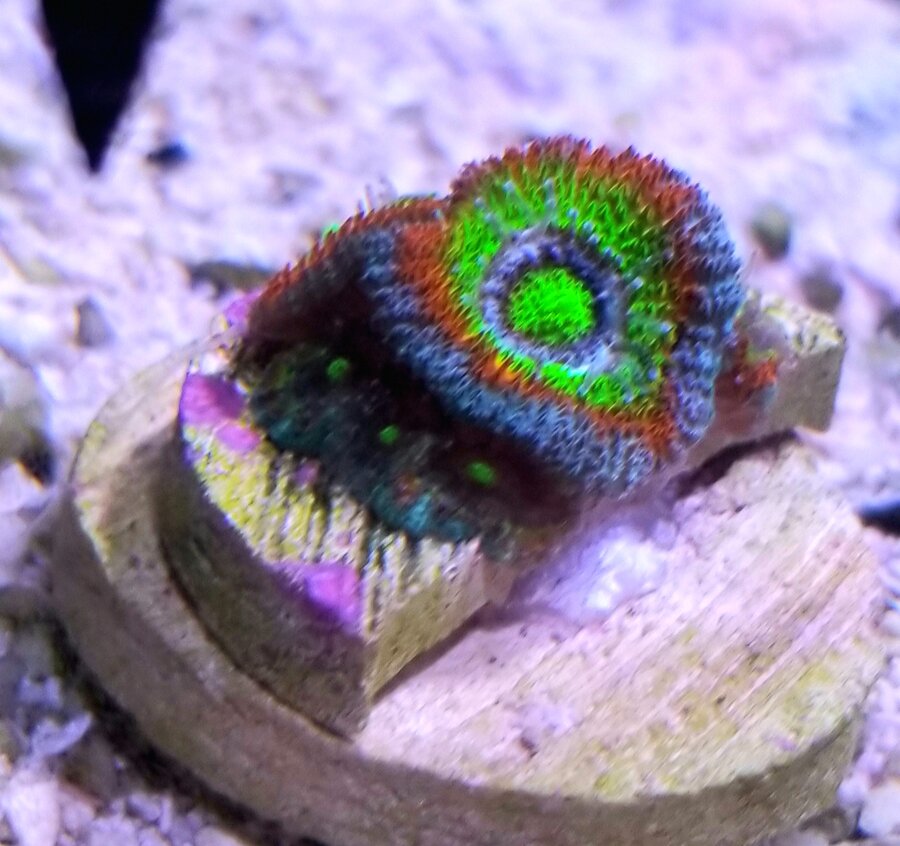 The new piece is larger more robust completly healed and putting iut new heads it has 2 fully developed heads aswell that are doubble the size if the first piece. If this piece fails it will be my last attempt with this coral. The closely related ufo micromussa amakusensis and my other "acan" lords are doing very well I see no reason this one should not.
Last edited: Jun 22, 2022

About to give the tank a good heavy feed with a water change coming later. Also cleaning the glass its prety dirty havent done it in atleast a week.

Discovered my large gorg in the standard 20 was getting slowly stung by my largest rfa. Its slowly been eroding away the tissue that's it's been right up against for months the tissue finaly started to slough off. Rfa genraly only irritate neighbors but sometines extended exposure can be dammaging. I went ahead and rescaped a bit to keep it off the rfa. Its eroded a fair ammount of the tissue at the bottom but it should grow back prety fast. I'll get some pics when the tank settles. I cut away the margins of the dammaged areas that appeared to be not entirely healthy aswell this should help it heal faster.

Cute anemone crabs! <3 <3
Yellow and orange filters on this. Some stuff is still a little angry about being moved. Sutch a chunk of dammage on the gorg. :( 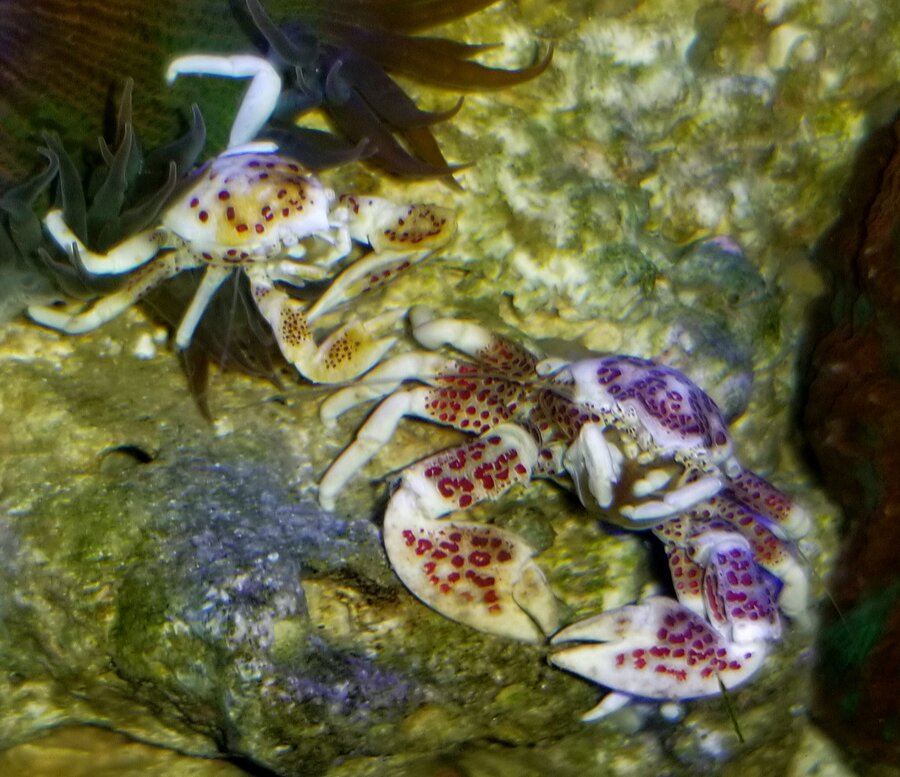 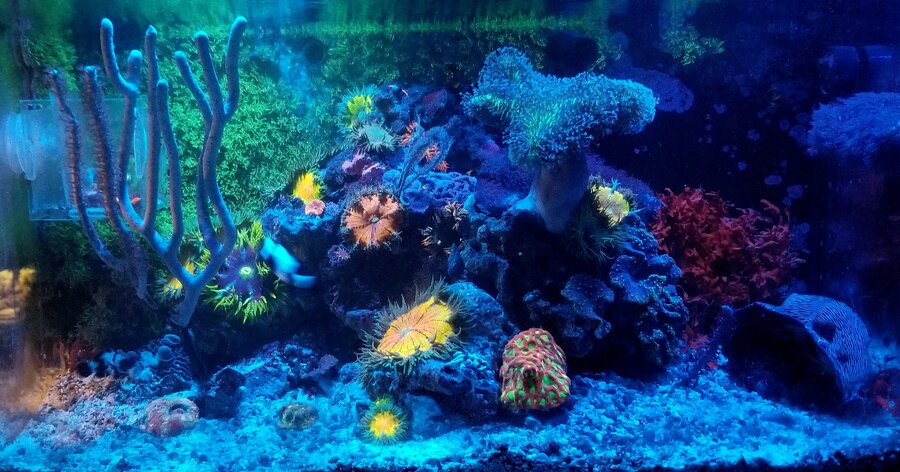 I see some recovery growth on the gorg and....looks the the baby polyps on the holy grail got a bit bigger! Im super excited to see it make more.

It literally just molted this was not in there a few hours ago. Too bad I mised it. Thought for a second it had died Haha. 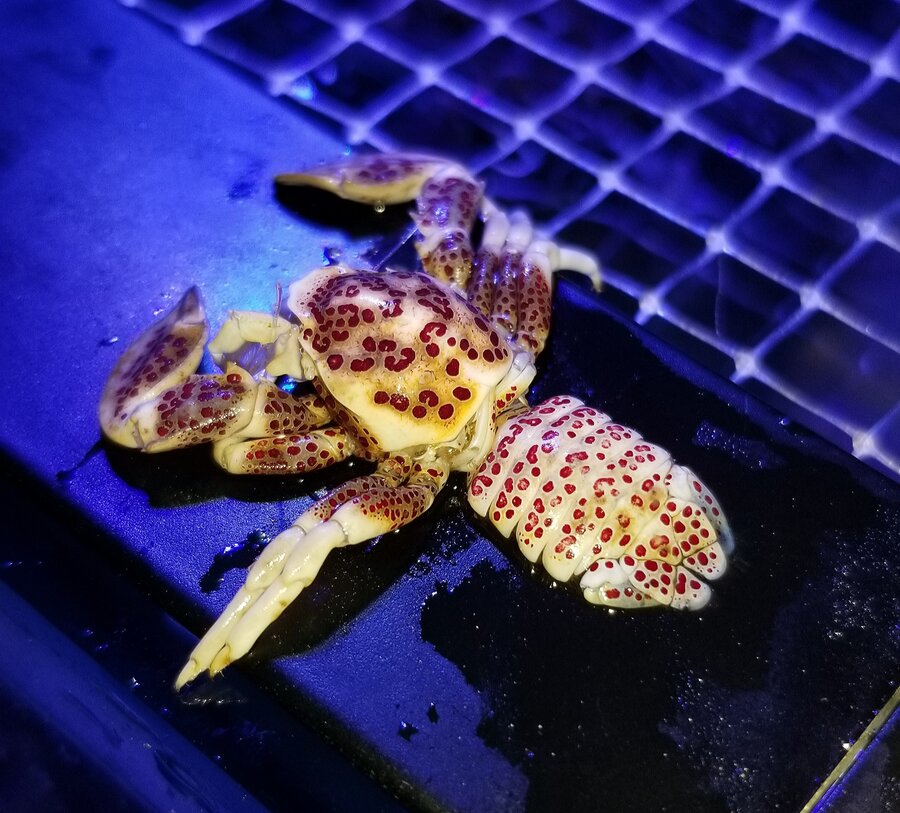 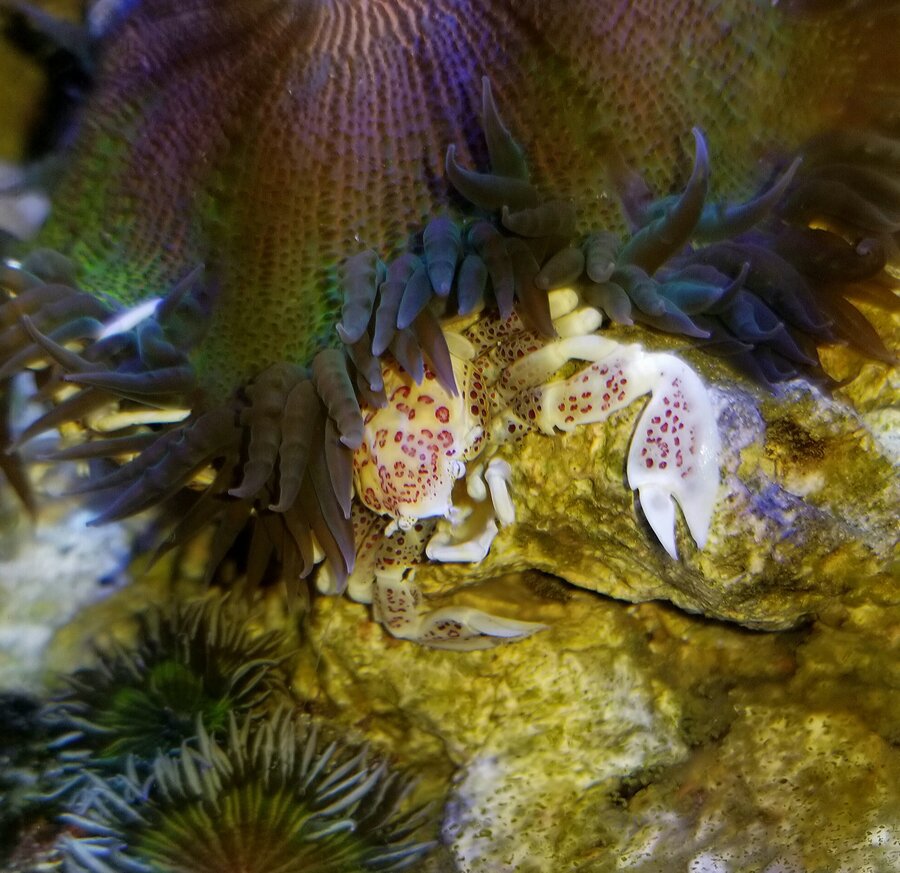 Birdsnest vs trachy.... trach wins....it came off the rock somehow and fell in while I was at work...its completly white now. It was growing so well too.. there is a a smaller piece that had previously broken off that I had stuck on the rock its still ok I guess I'll just have to grow it back out from that.

Lazyfish said:
Birdsnest vs trachy.... trach wins....it came off the rock somehow and fell in while I was at work...its completly white now. It was growing so well too.. there is a a smaller piece that had previously broken off that I had stuck on the rock its still ok I guess I'll just have to grow it back out from that.
Click to expand...

Its growinggggg!!!! I even see some new itty bitty baby polyps starting! 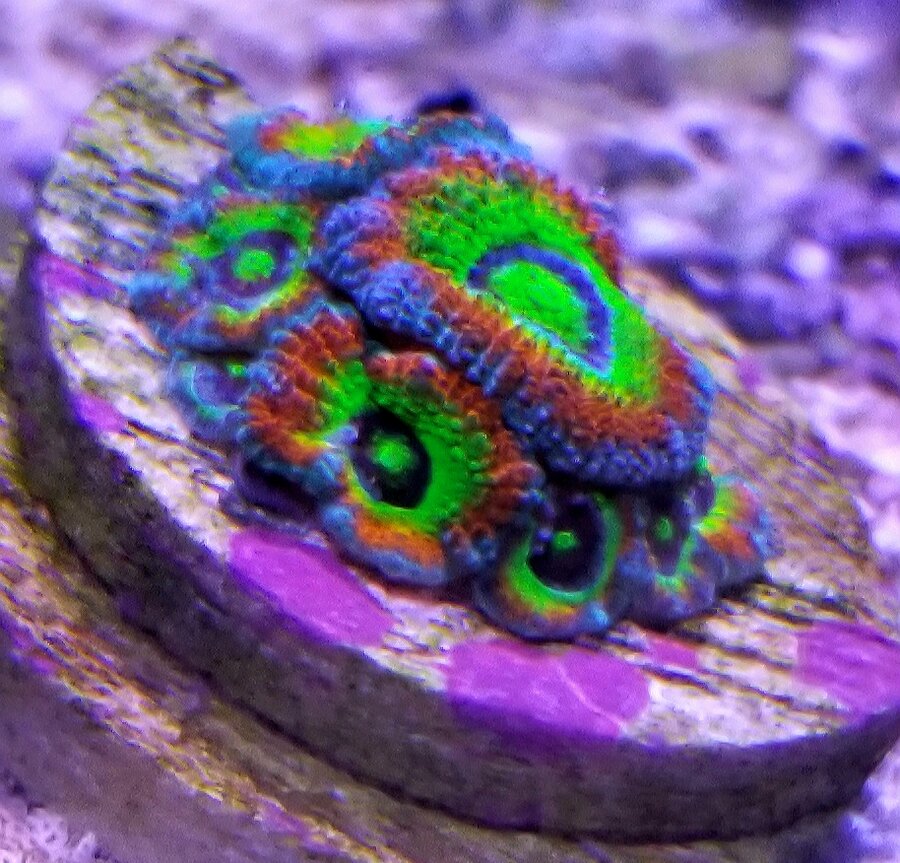 Getting bigger!. New top down and fts. Need to clean glass again. 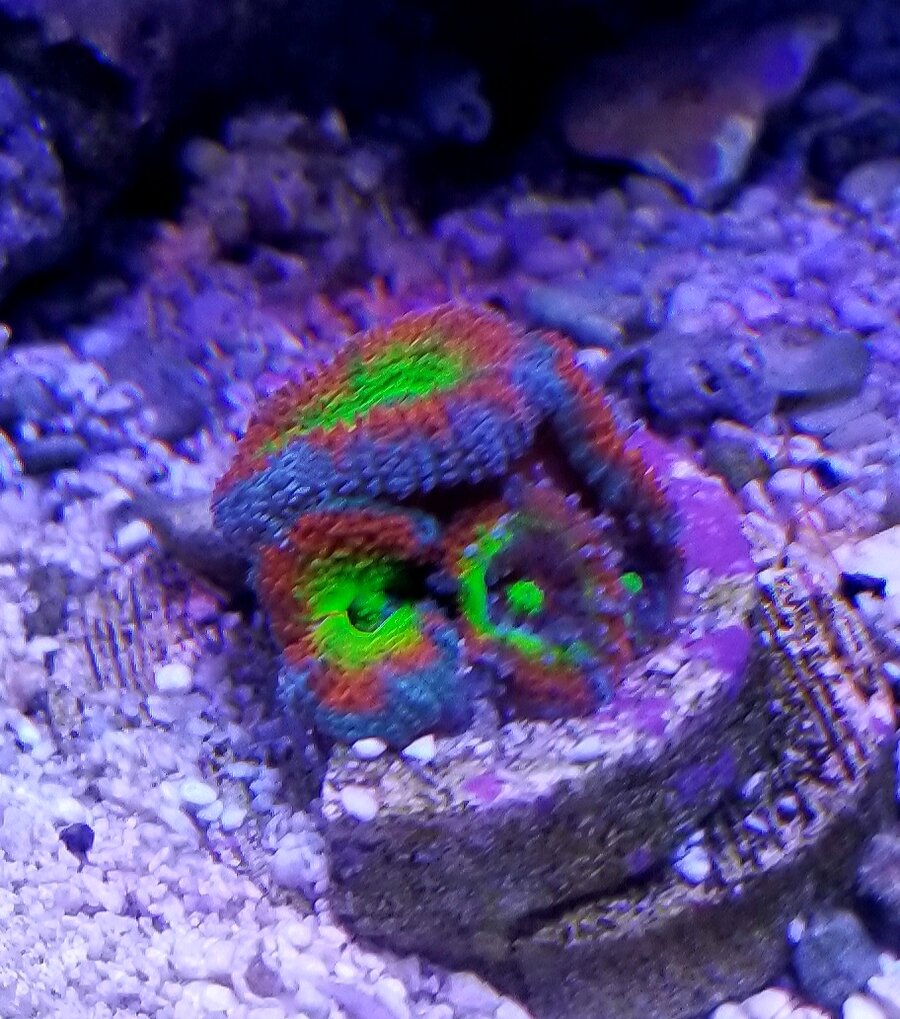 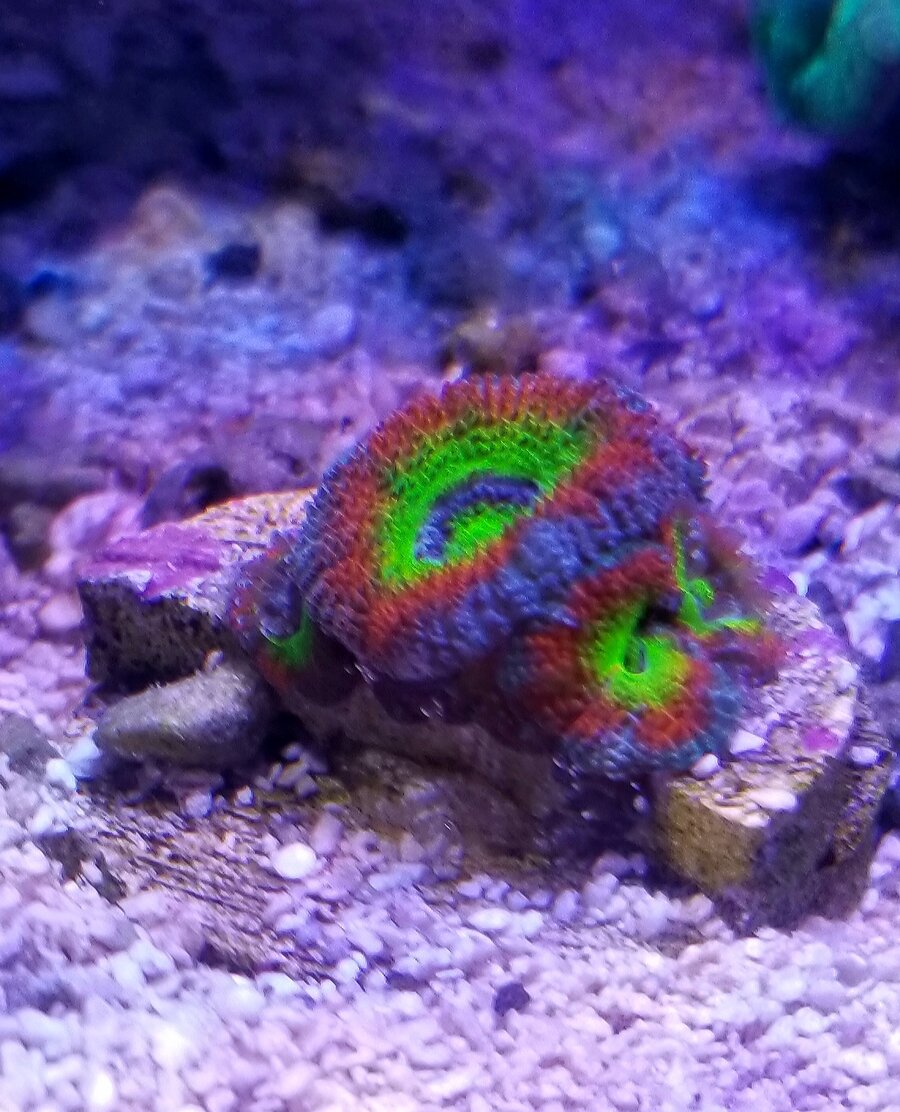 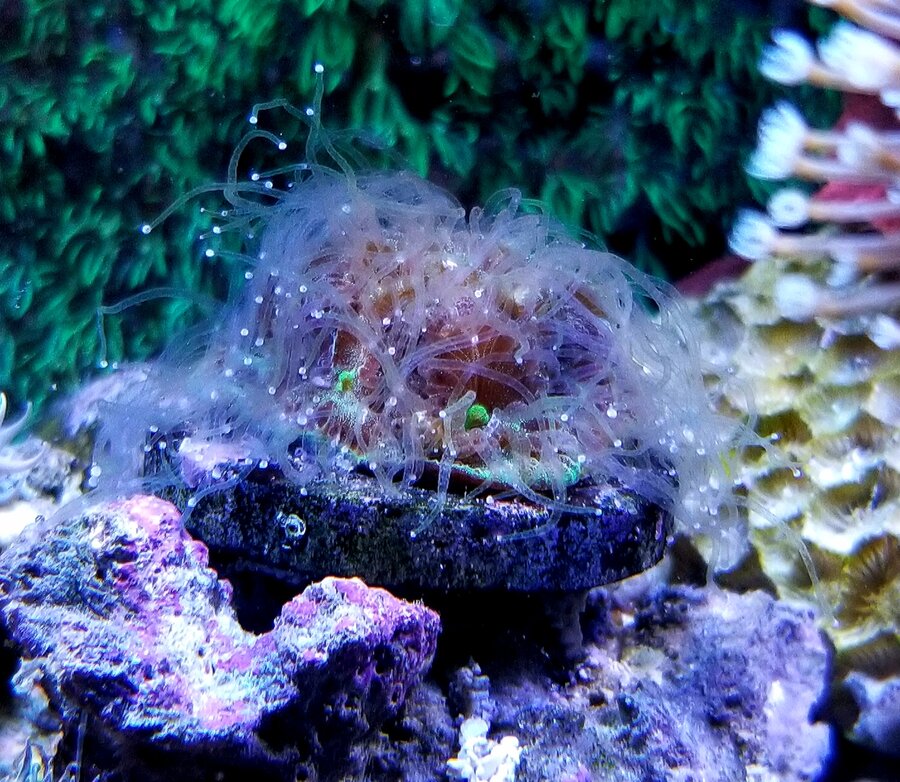 That is one healthy, vigorous feeder for sure. I do not know if I have ever seen an equal to that one!

Dirty dirty dirty.
The glass is anyway....
I've misplaced my glass scraper and those remaining frags are just hanging out in the corner. 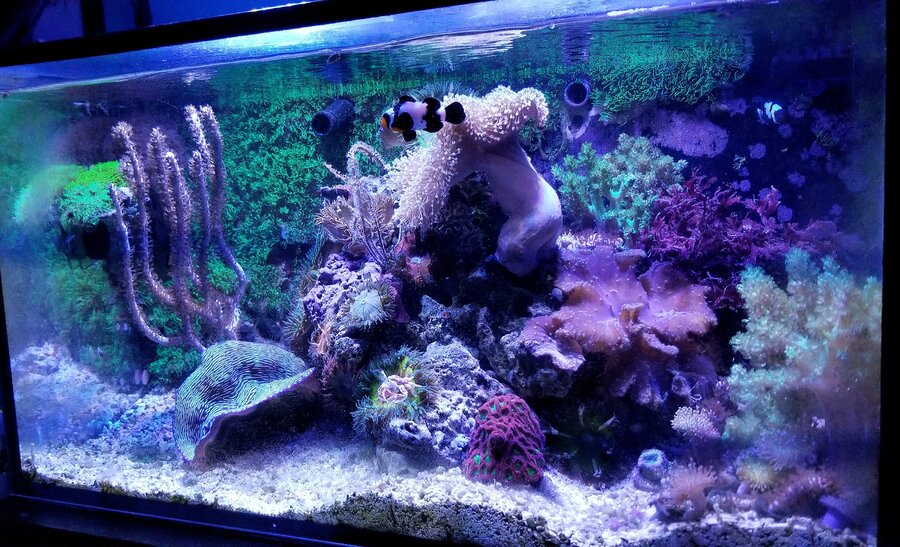 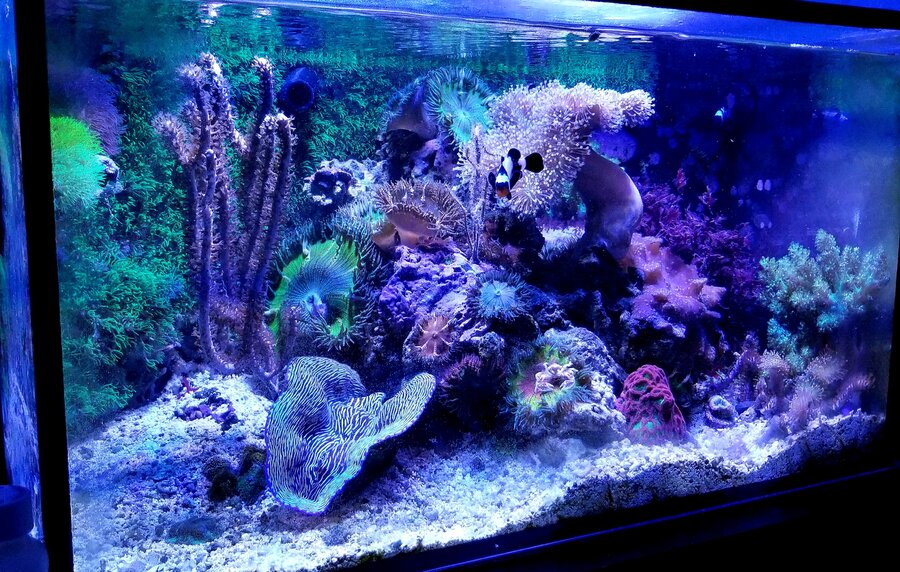 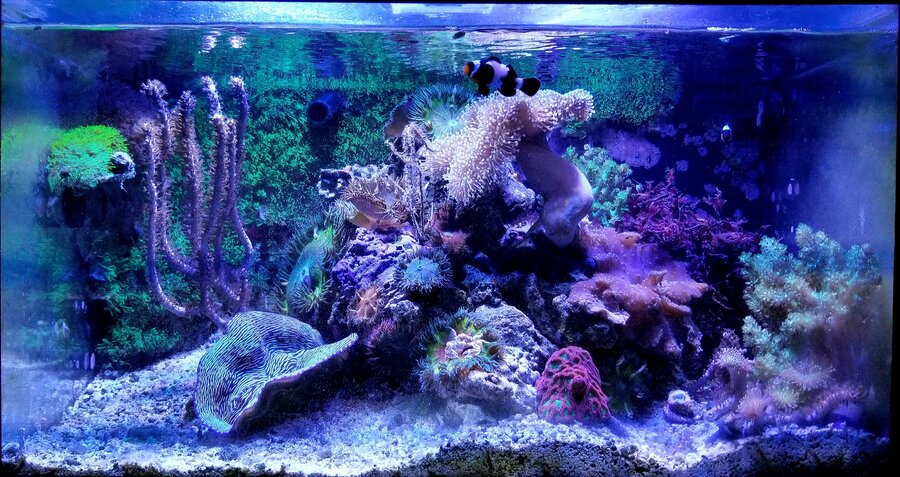 The lights are going down for the evening in both tanks. The one big holy grail is still growing very well.

Early morning fts on both tanks. 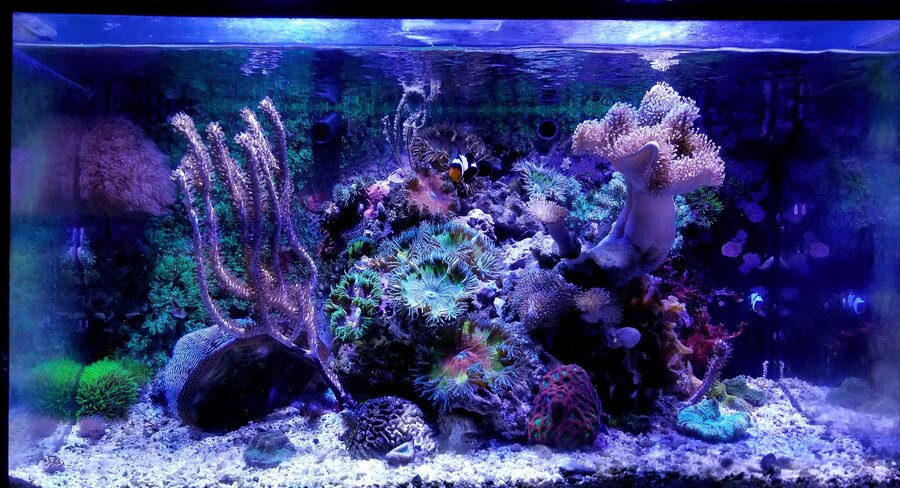 Back wall after lights out on the standard 20 aio. I didnt even know how much of this pink sponge was on there. Look at how the gsp is layering and making fleshy protrusions near the bottom. 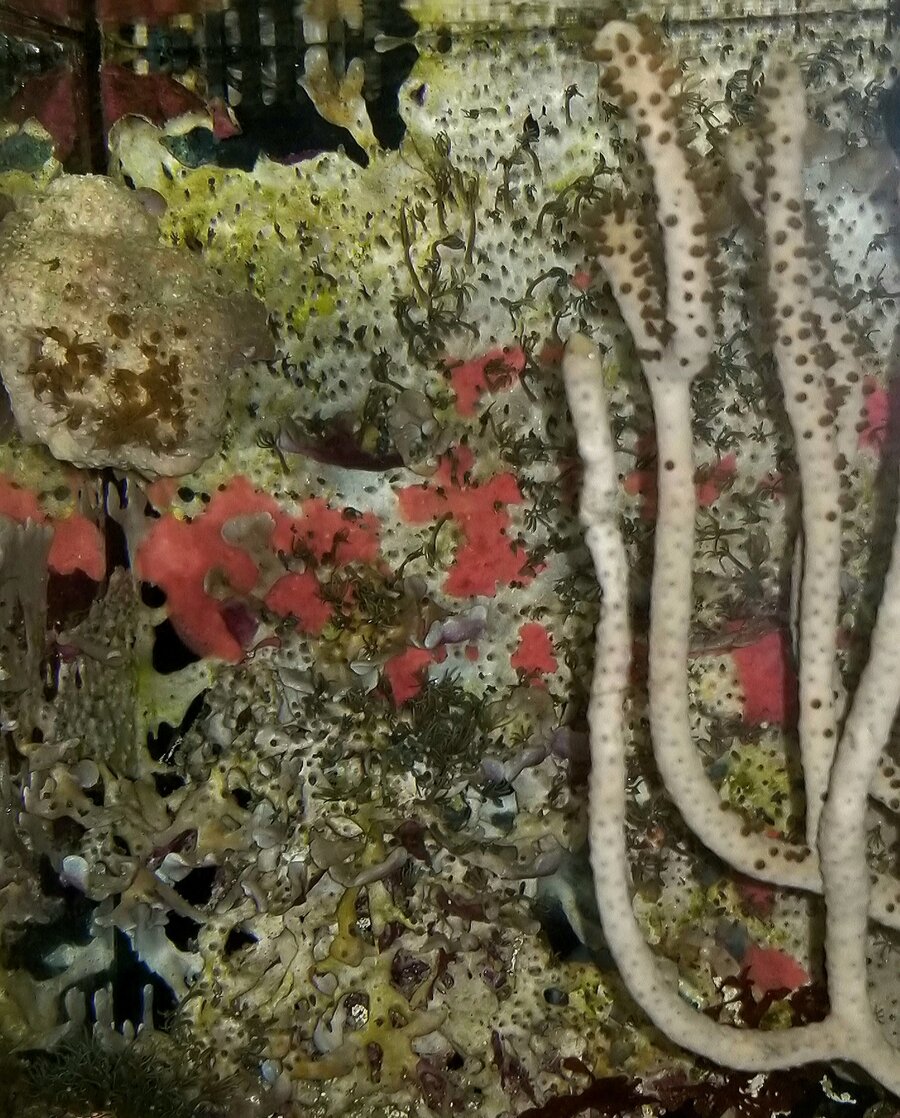